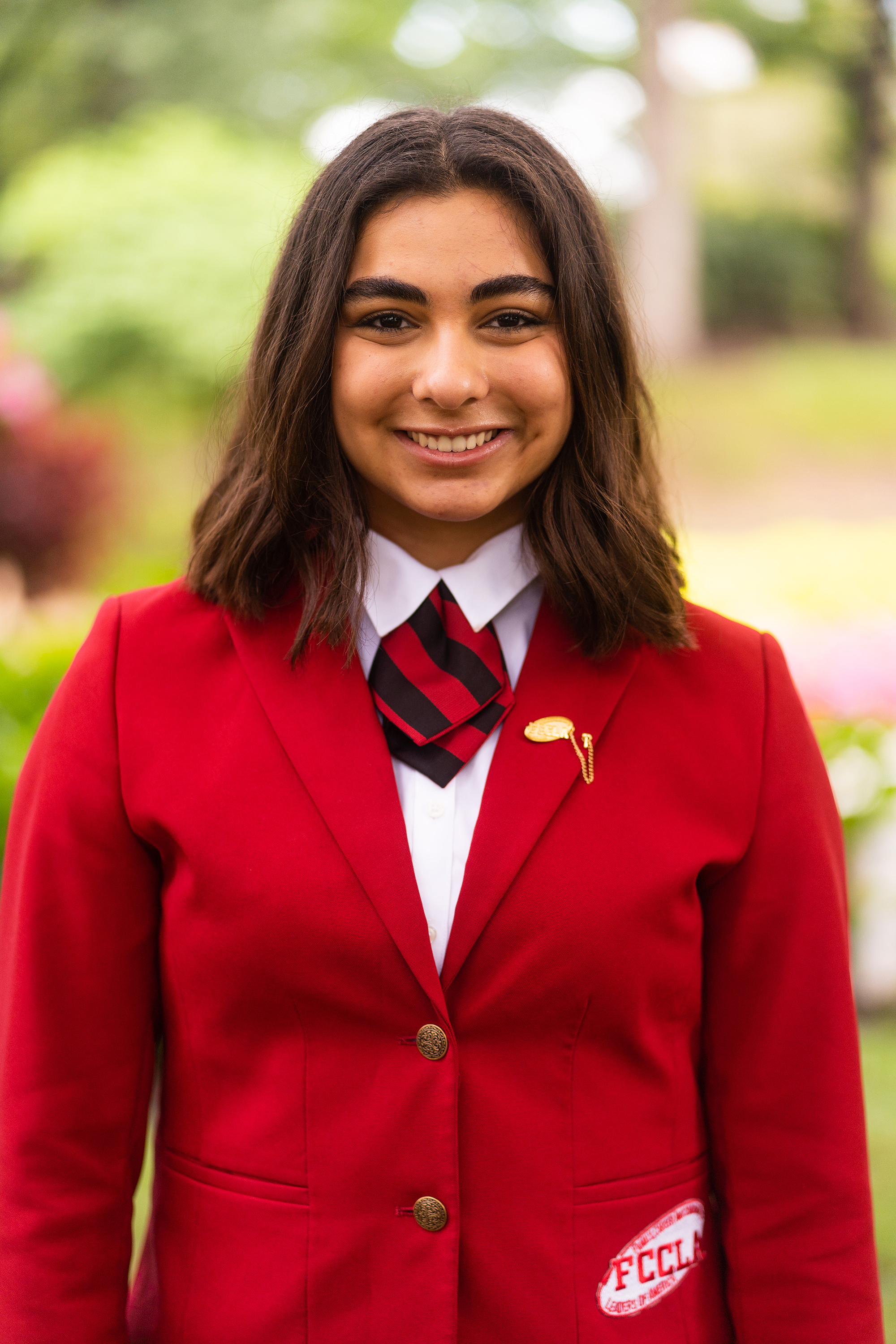 Supriya (Supy) Patel has been an active and involved FCCLA member since ninth grade. Last year, she served as Minnesota FCCLA’s Vice President of Public Relations. She also previously served as her chapter’s President. Along with FCCLA, she is a varsity swimmer and participates in Women for Change, National Honors Society, and Knowledge Bowl. Outside of school, she swims on a local club team and takes voice lessons. She enjoys reading, traveling, yoga, and playing with her English bull dog. After high school, she plans to attend college on a pre-med track. 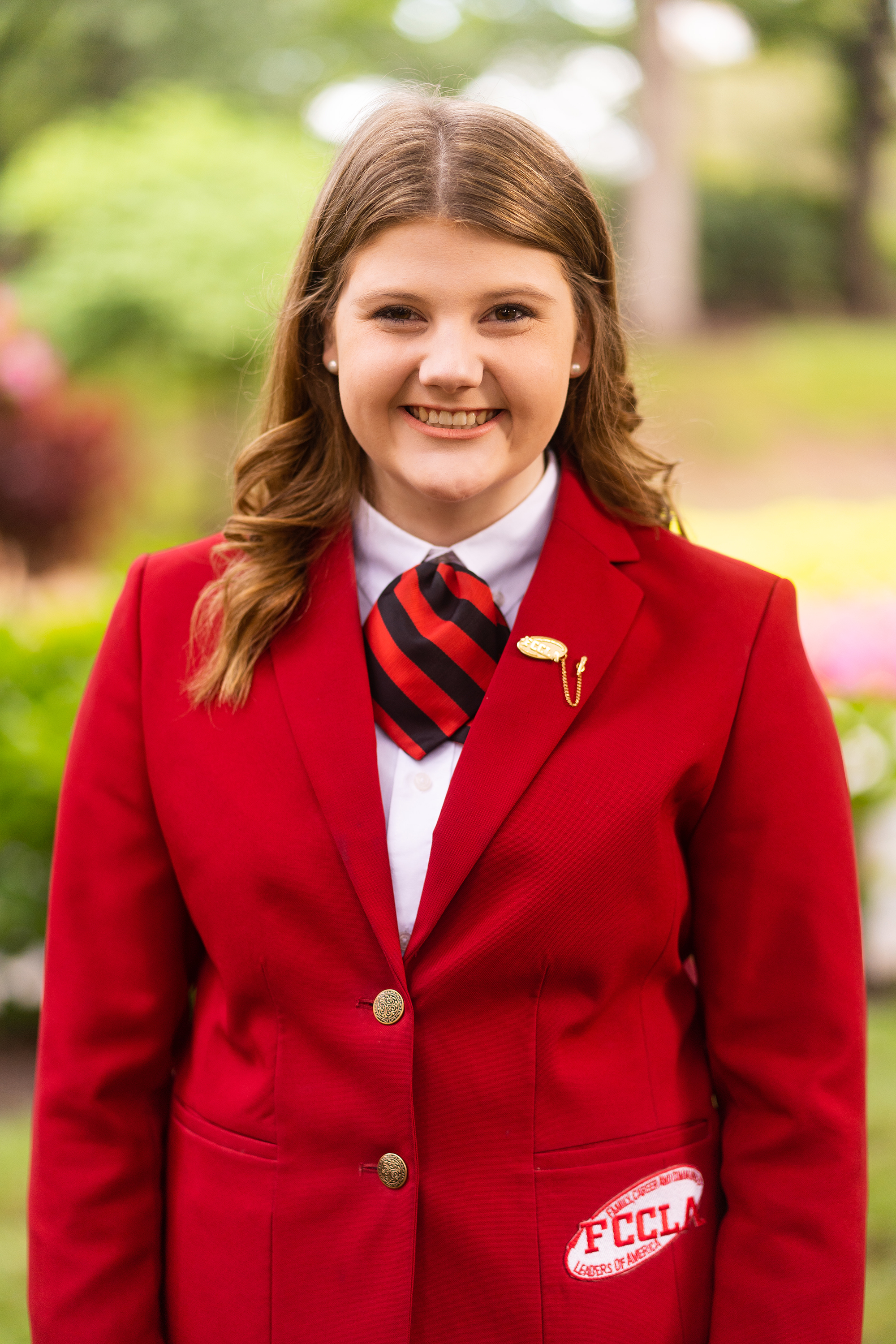 For the past four years, Hannah has been an active member of FCCLA. She has served as Kentucky’s Region 15 President and Kentucky FCCLA’s State Vice President of Individual Programs. Apart from FCCLA, Hannah is an active member in her church and youth group, dance team and varsity volleyball captain, an avid volunteer in her community and a Rae of Sunshine Ambassador. Hannah loves traveling, singing, and learning new things. After high school, Hannah plans to attend the University of Kentucky and later attend medical school and study to become an Obstetrician. 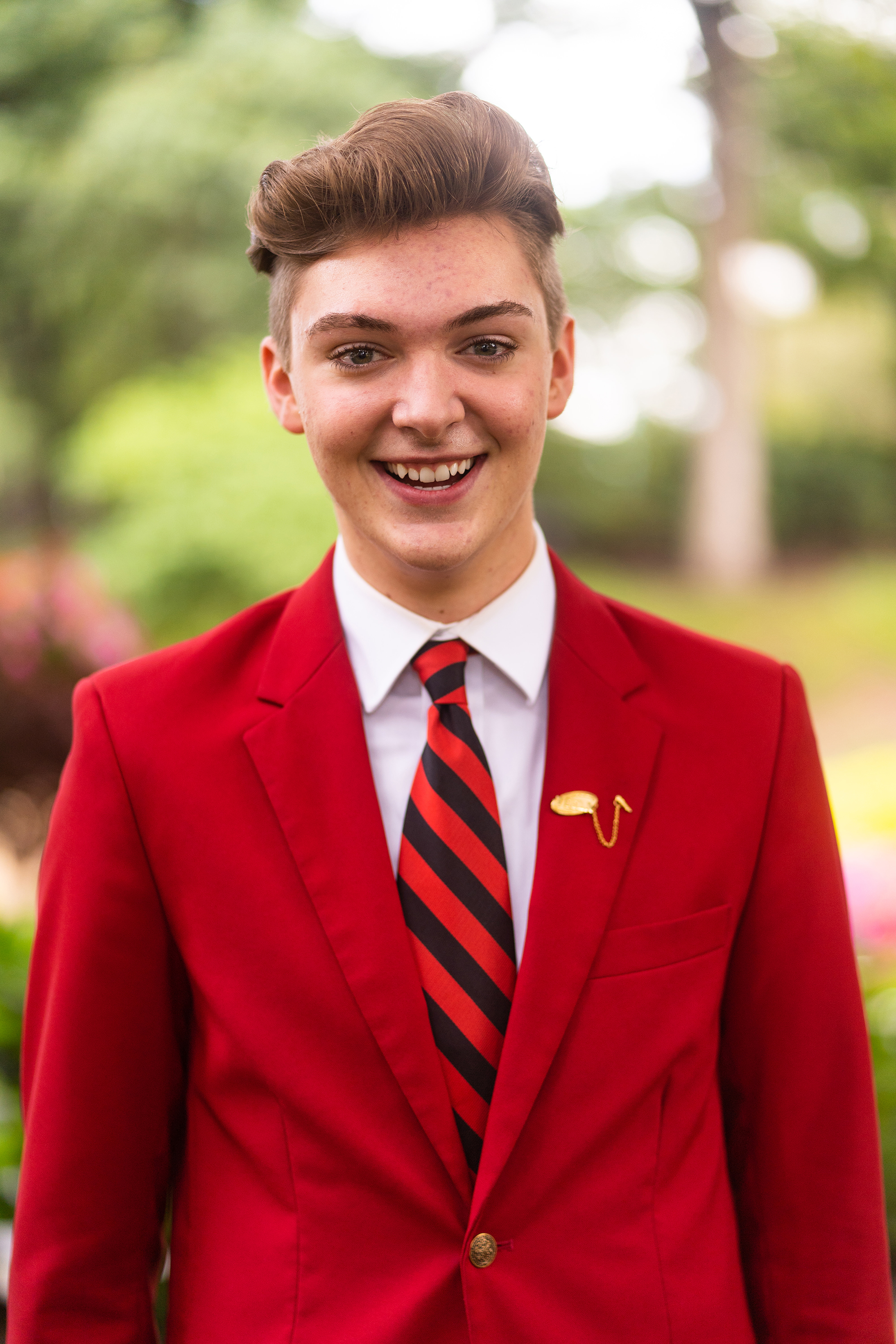 For the past three years, Weston Buhr has been actively involved in FCCLA. He has competed in two state and national conferences, achieving gold medals in both National Programs In Action - Power of One and Chapter Service Project Display. He most recently served as Colorado's FCCLA Second Vice President as well as the Arkansas Valley District President. In addition to FCCLA, Weston is deeply passionate about music and uses his musical talents to bring his community free piano concerts every December. Weston hopes to use his love of service to inspire other FCCLA members to give back to their families, schools, communities, states, and country. In addition to FCCLA and music, Weston is involved in 4-H, National Honor Society, Phi Theta Kappa Society, Student Council, Show Choir, and theater. His goal after high school is to earn a degree in piano performance so he can continue to inspire others through music. 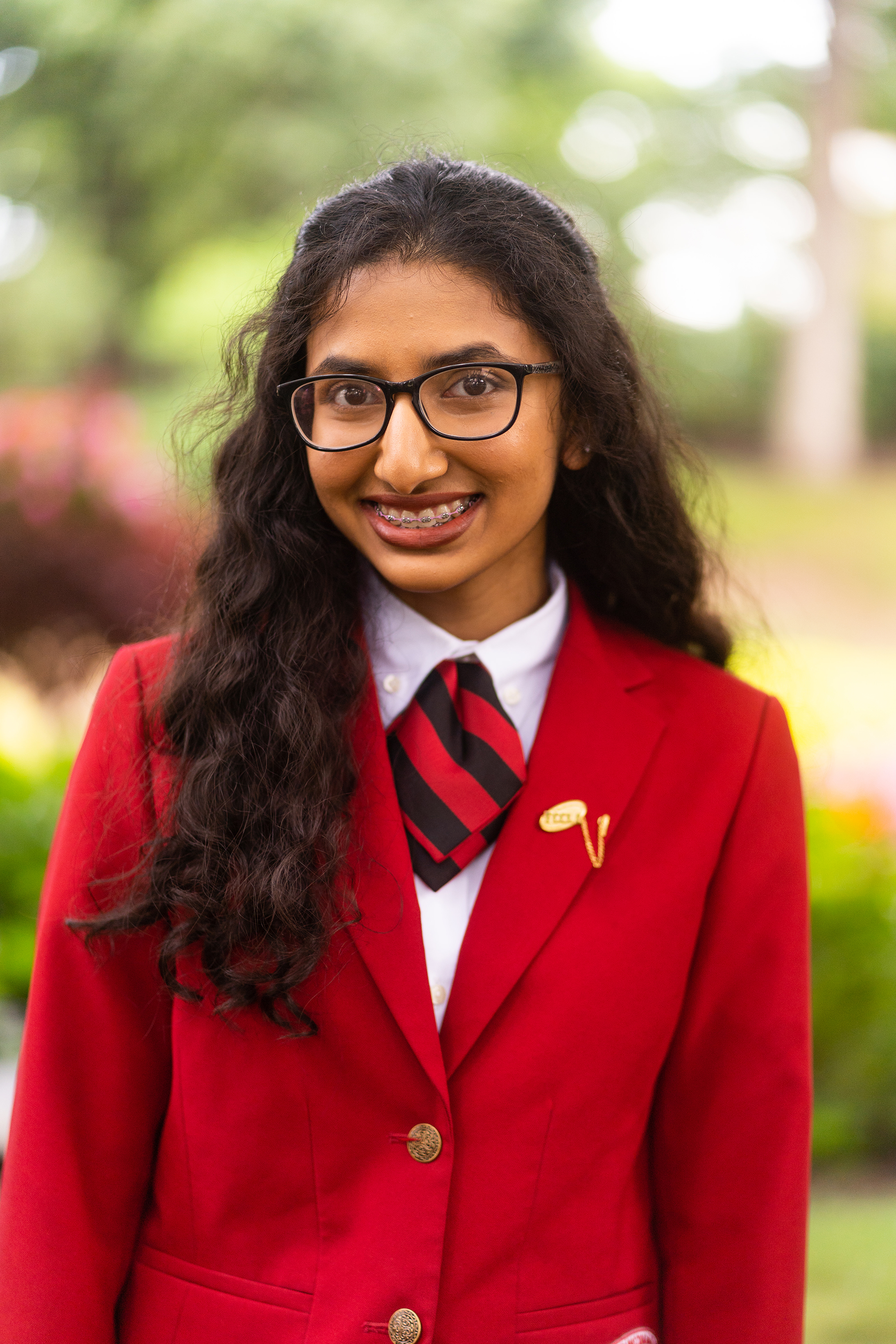 Melanie Mendonca has been an active member in FCCLA for the past three years. Most recently, she served as the Co-President for New Jersey FCCLA and as her chapter’s Communications Officer. Outside of FCCLA, Melanie has been scouting as a girl scout for the past seven years and participates as an altar-server in her church. She is also a member of National Honors Society, National Technical Honors Society, and French Alliance. In her free time, she enjoys playing her guitar, trying new cuisines with her friends and family, and traveling at any opportunity she gets! Melanie aspires to serve her community by becoming a clinical psychiatrist. 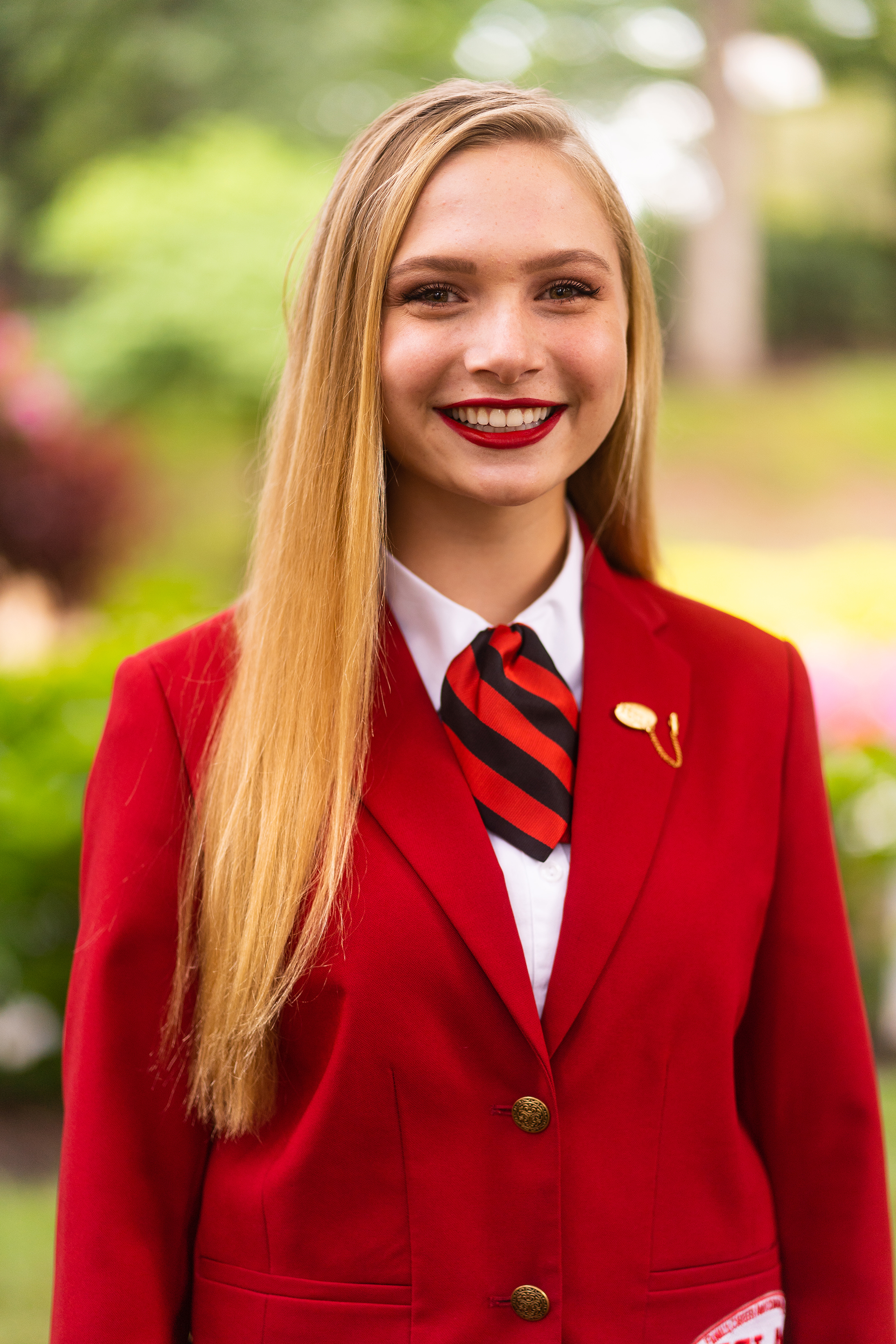 FCCLA has been an instrumental part of Faith Honey Anderson's life for the past four years. Serving as a Wyoming District Officer, State Parliamentarian, and both Chapter President and Public Relations Officer, she has learned a variety of skills that she will carry with her into the future. With a heart for helping others, she is ready to serve in her family, future career, and community. With the schedule flexibility that comes with being an online student, Faith Honey is involved in numerous activities alongside FCCLA, such as serving on the Wyoming State 4-H Leadership Team, and being an American Legion Auxiliary Junior Member. In her free time, you can find Faith Honey backpacking, traveling, going to youth group, and spending time with friends. 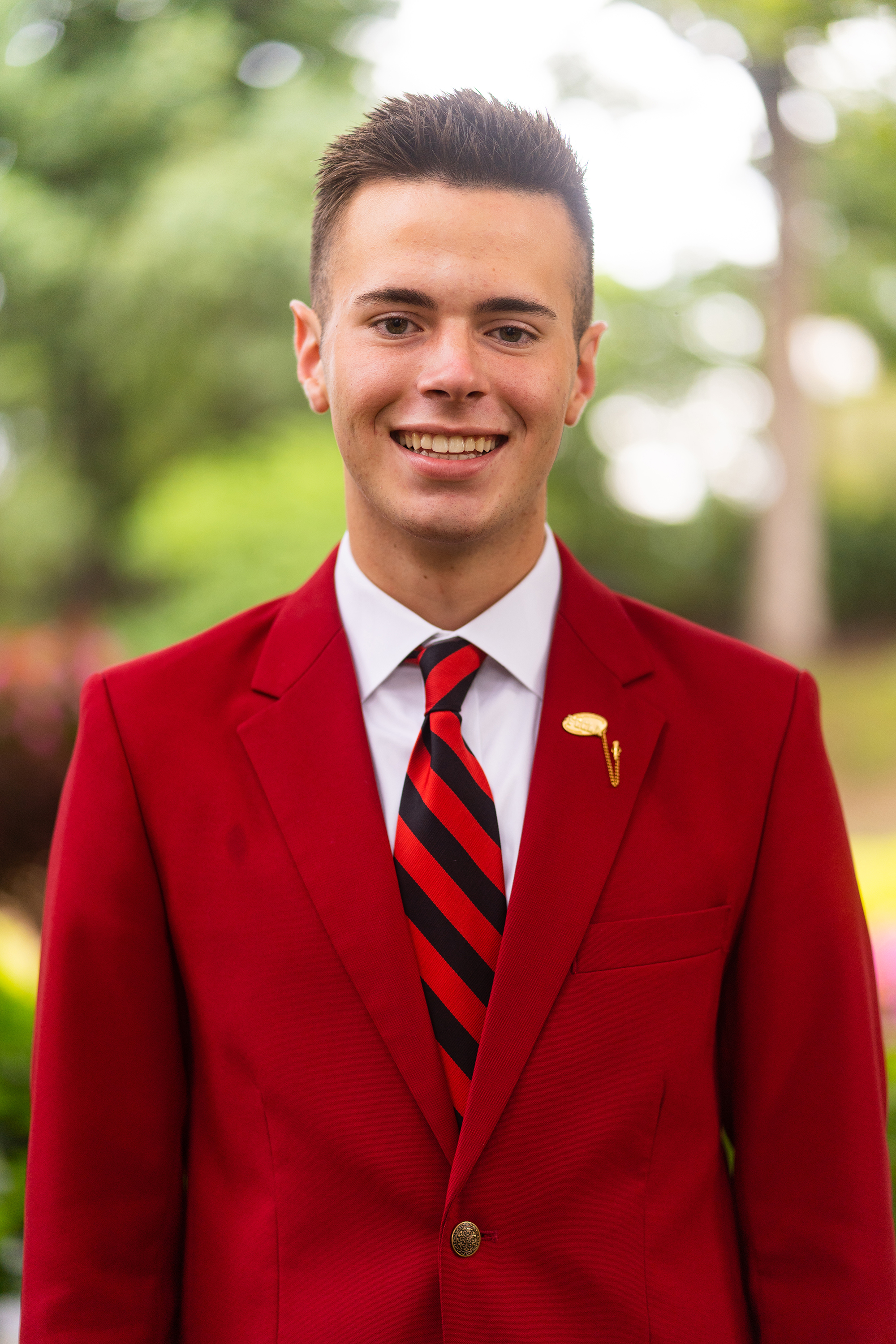 Kaden Fox has been an active member of FCCLA for five years. He has served in multiple chapter office positions, as his district's president, and most recently as the Kansas FCCLA State Vice President of Corporate Relations and Finance. Kaden has always been passionate and driven to making a positive impact in the lives of others. Outside of FCCLA, Kaden is the head drum major for his school's marching band, the president of his school's coffee shop, an officer in his school's Student Council, and is a member of National Honor Society and Math Club. In his free time, Kaden enjoys spending time with family and friends and loves to travel. After high school, Kaden plans to work towards obtaining a degree in orthodontics. 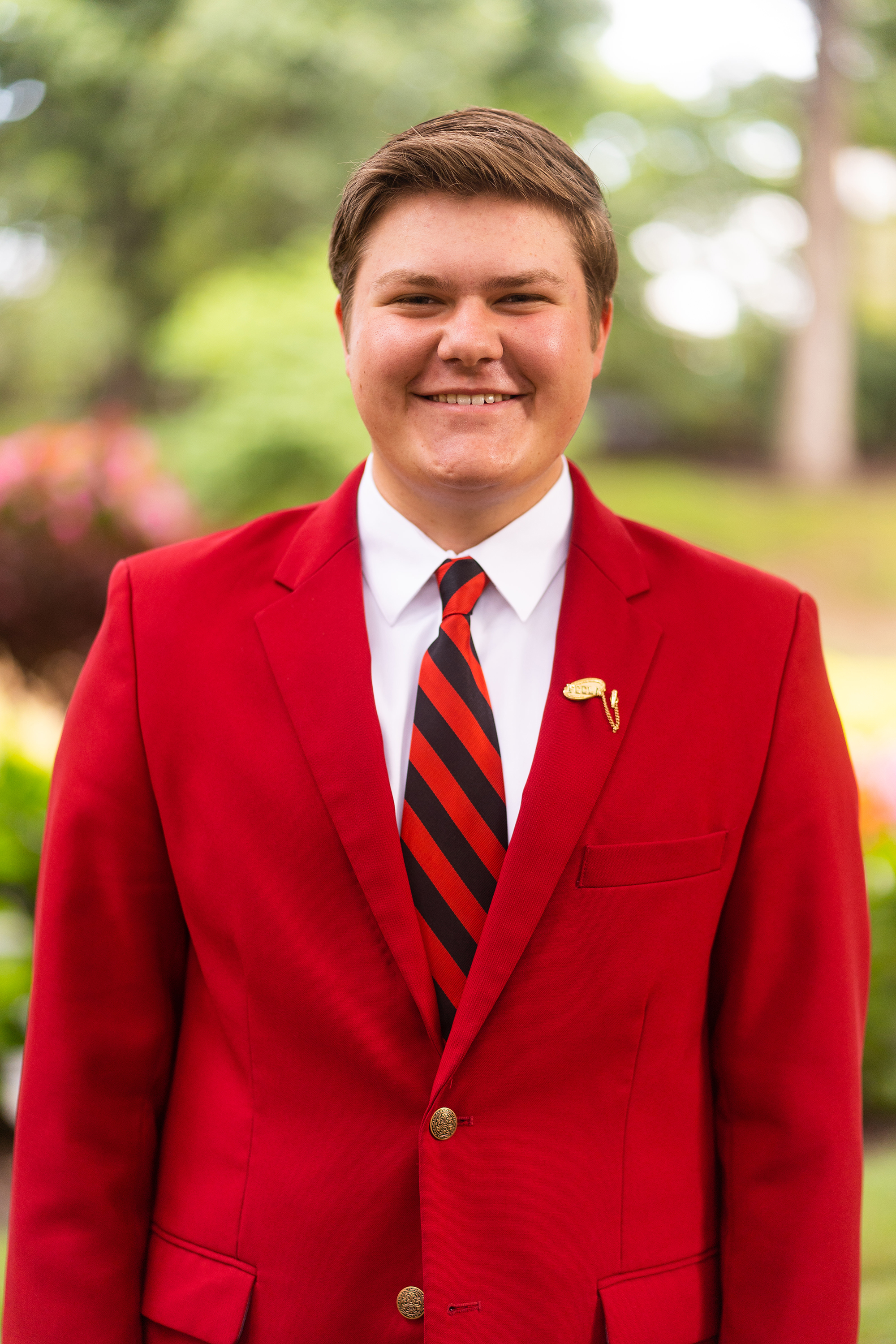 Logan Justice has been actively involved in FCCLA for six years. Previously, he served as the Kentucky First Vice President, Kentucky Region 15 Vice President of Community Service, and in multiple chapter offices. Along with his participation in FCCLA, Logan also serves as the Co-President of the Paul Laurence Dunbar (PLD) Student Council, an Ambassador for the Rae of Sunshine Foundation, and is the Public Relations Manager of PLD Lamplighter Media Productions. In addition, he is a member of the Spanish Honors Society, Science Honors Society, PLD Golf Team, National Beta Club, and the Quill and Scroll Honor Society. One of Logan’s passions is to give back to his community. In his free time, you can catch Logan volunteering, spending time with his family, and looking for new adventures! 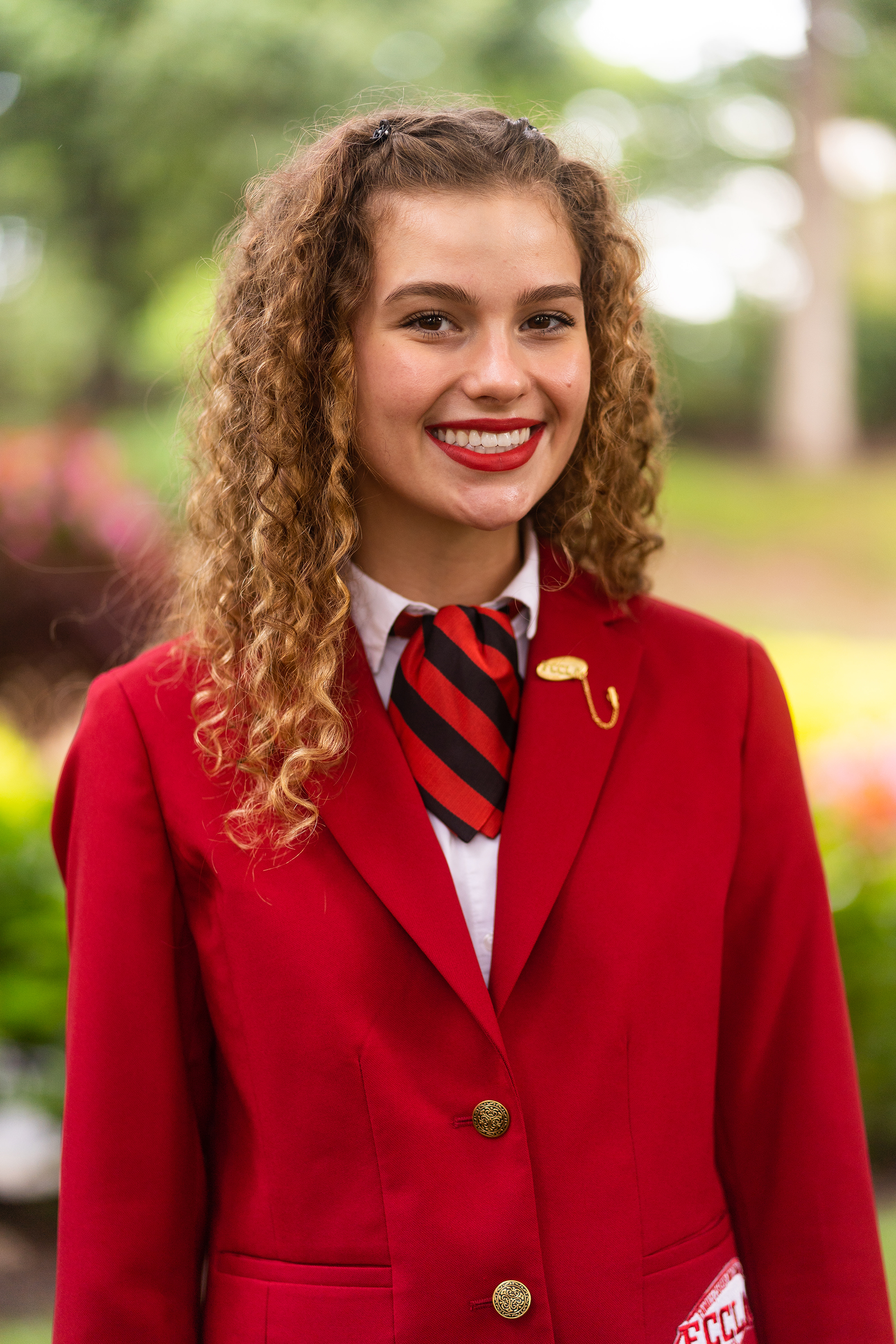 Bellamy Wooten has been a part of FCCLA for the past three years. She has most recently served as Texas FCCLA's Vice President of Programs and her chapter's Regional Officer Candidate. In addition to her participation in FCCLA, Bellamy loves to stay involved in her school and community. She is an officer in Student Council, drum major of her band, a University Interscholastic League competitor, member of National Honor Society, and involved in her school's yearbook and art club. In her free time, Bellamy loves to hang out with her friends and family. After high school, she plans to travel, study different cultures, and be a positive influence in the world. 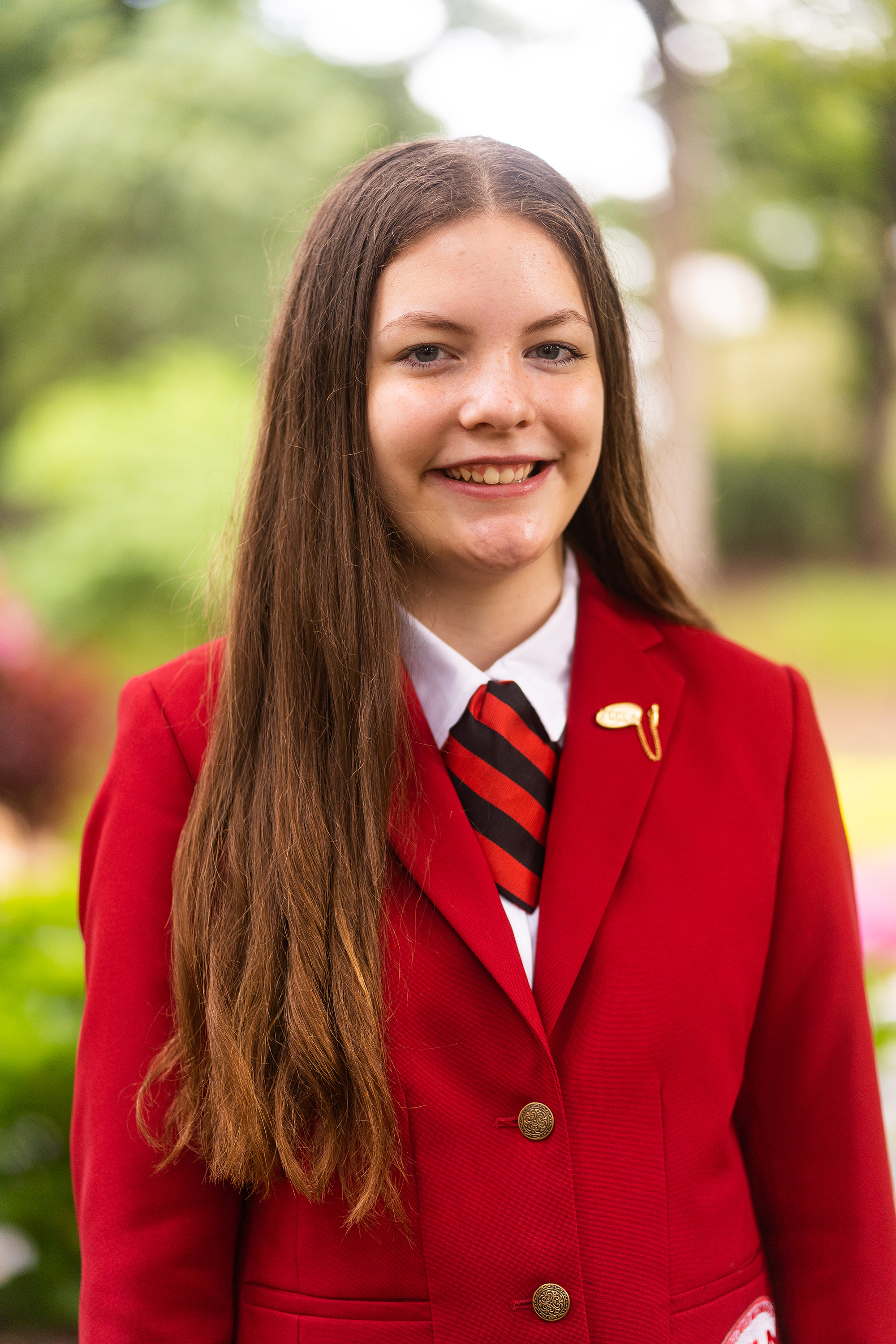 For five years, Regan Rhymes has been an active member of FCCLA. She has served as North Carolina's FCCLA State Vice President of Middle Schools and her school's Chapter President. Outside of FCCLA, she is involved in Professional Choir, Spanish Honor Society, service groups, Student Council, and drug awareness organizations. In her free time, Regan enjoys baking, making music, spending time in nature, and hanging out with friends and family. A huge fan of traveling, Regan has made a bucket list that includes traveling to more than 30 different countries. After high school, she aspires to become a registered dietitian and get her Masters of Public Health in order to help people maintain healthy lifestyles. 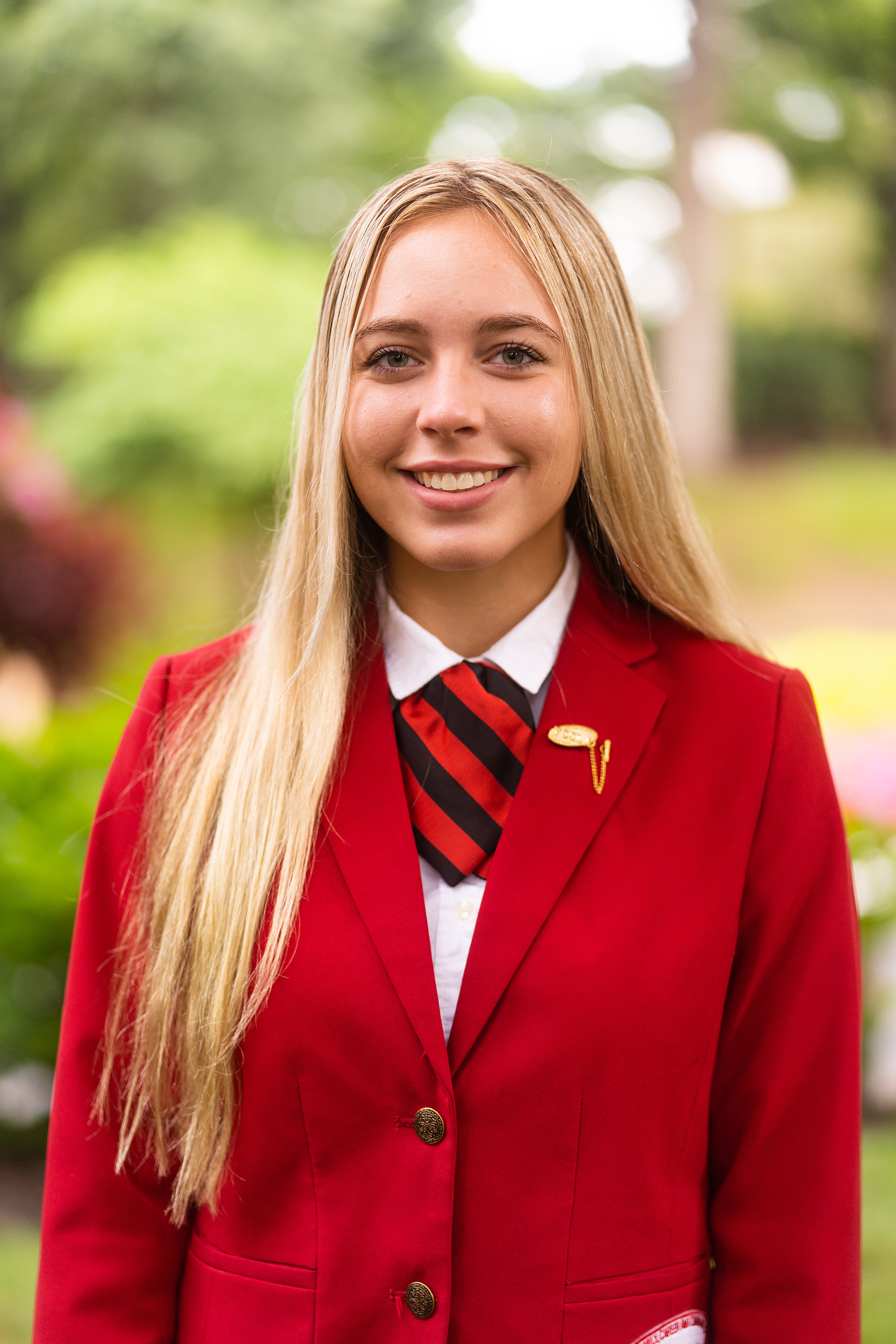 Although only officially affiliated for three years, Brynley Jones has been a dedicated partner of FCCLA for six years. She served as the Georgia Region 9 Officer and has hosted several workshops, developed membership campaigns, and advocated for FCCLA to legislators. She has a passion for Family and Consumer Sciences  education and servant-leadership. Outside of FCCLA, Brynley enjoys SkillsUSA, National Honor Society, graphic design, sports photography, traveling, and modeling.  She has been to over half the United States! After high school, Brynley hopes to pursue a degree in political science with a minor in a STEM-related concentration.