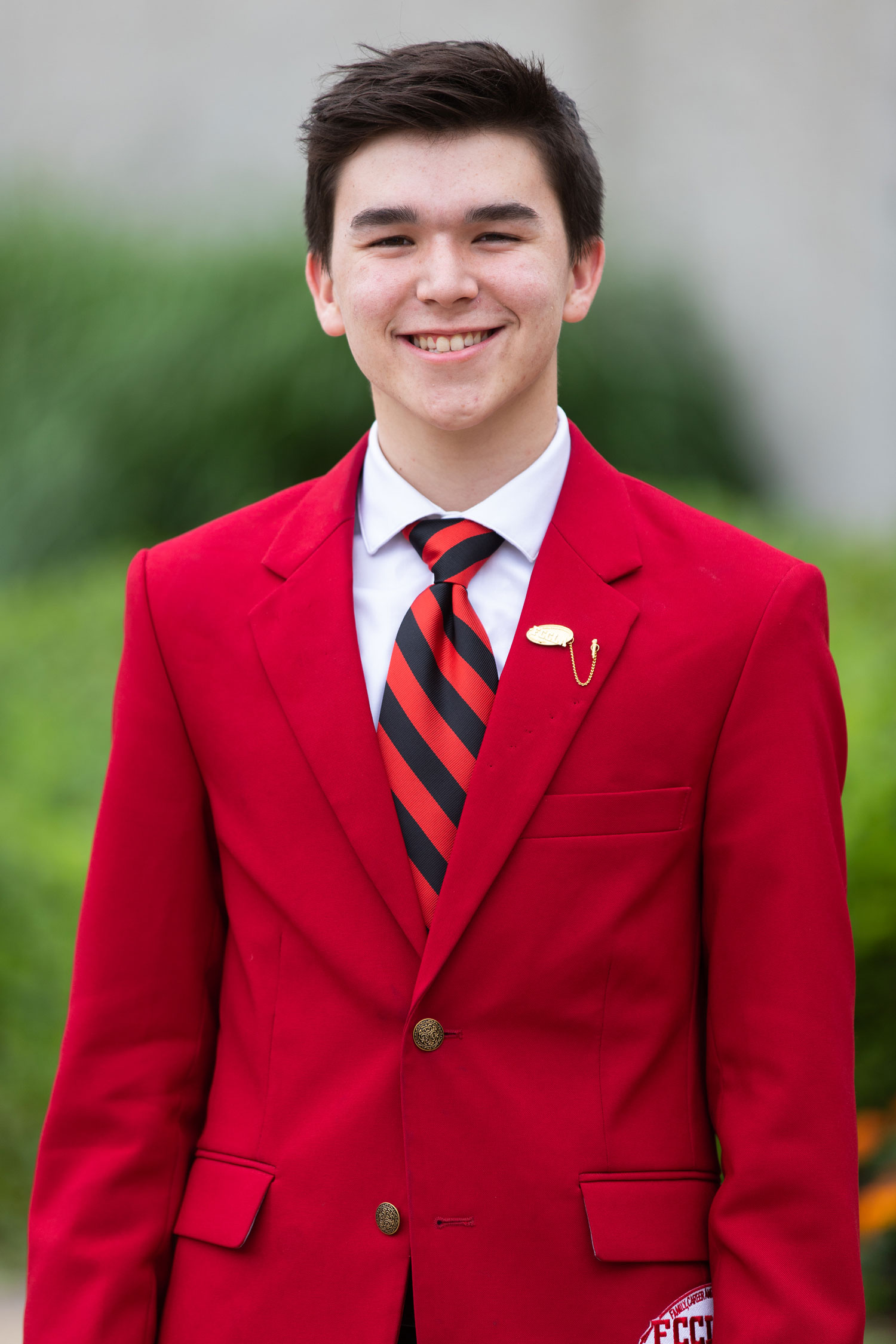 Hunter Prinz has participated in FCCLA for the past five years. Prior to joining the National Executive Council, Hunter served as the Texas State Parliamentarian and Chapter President. Outside of FCCLA, Hunter is a varsity track member, a one-act play actor, the President of National Honor Society, and a Yearbook Editor for his school. In his free time, Hunter enjoys practicing new music on his guitar and piano, spending time with friends and family, and staying active at the gym. In his post-secondary years, Hunter plans to major in Political Science with aspirations to eventually become a politician. 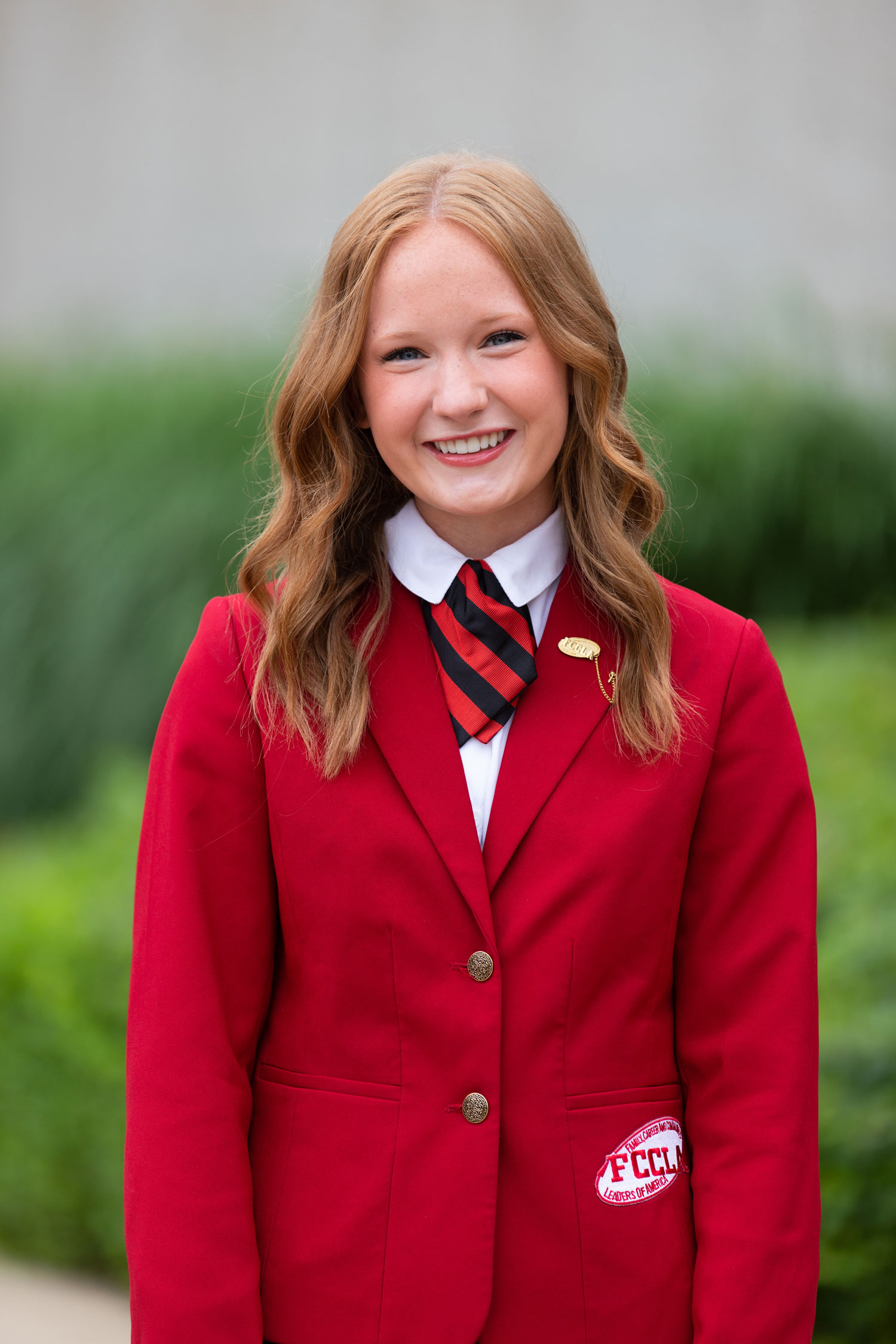 Maria Deddens has been an active member of FCCLA since sixth grade. Throughout her time as a member, she has served as the Indiana State President, District President, and Chapter First Vice President. Outside of FCCLA, Maria is an active member in National Honor Society, Student Ambassadors, Student Council, and her church Youth Group. In Maria's free time, you can find her spending time with her friends and family, kayaking or golfing, and giving back to her community. Maria dreams of one day becoming a pediatric nurse. 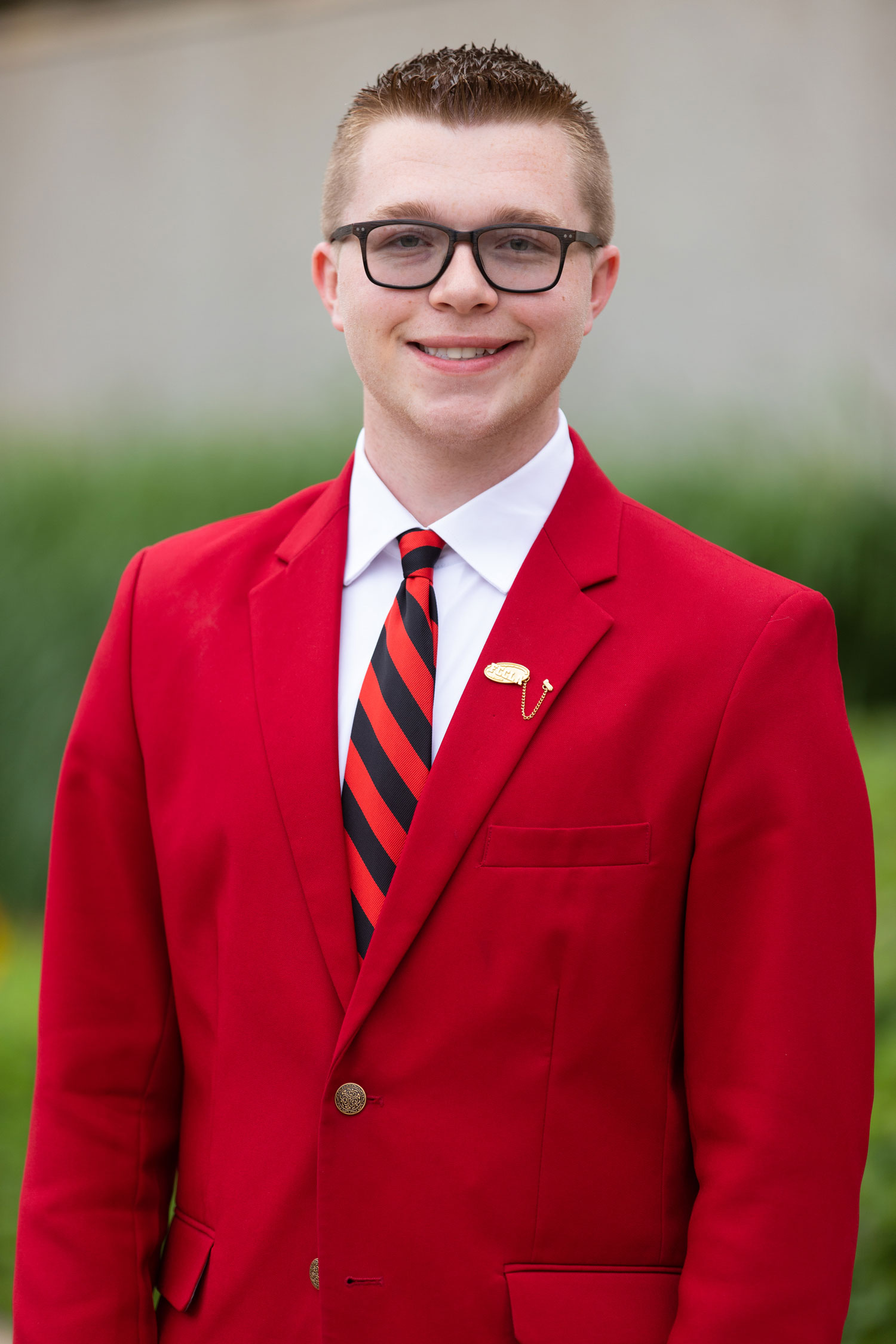 For the past five years, Zeb Kelly has been actively involved in FCCLA. He has most recently served as Oklahoma's FCCLA First Vice President and previously served as Oklahoma's FCCLA North 4 District President as well as a four-year Chapter Officer. In addition to FCCLA and volunteering, Zeb is involved in Robbie’s H.O.P.E, Mindfulness First, Student Council, 4-H, BPA, Art Club, Yearbook, Citizen's Caring for Children, Wings of Hope, and church. Zeb wants to help children find their place and voice in this world and aspires to earn a degree in Psychology and work in the child care industry. 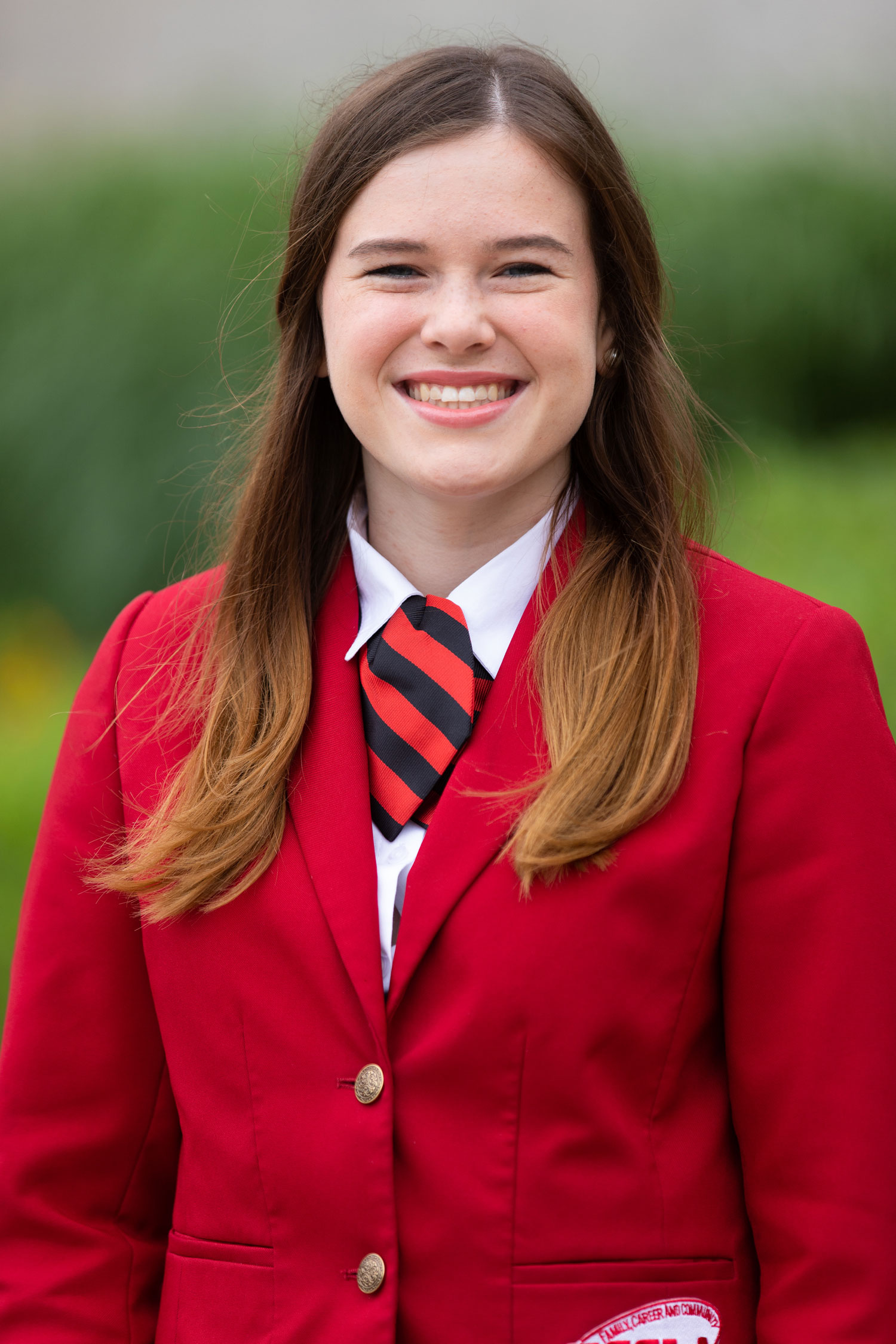 Kirstin Johnson joins the National Executive Council with six years of FCCLA experience. Previously, she served as the Washington State Vice President of Competitive Events and Washington State Vice President of Region 7. During her time in FCCLA, she has also competed in five different STAR Events, each of which earned gold at the national level. Outside of FCCLA, Kirstin is involved in Knowledge Bowl, Running Start, Youth Group, and volleyball. She enjoys fishing, creating art, and spending time outside with friends, family, and animals. After high school, Kirstin plans to pursue a career as a midwife. 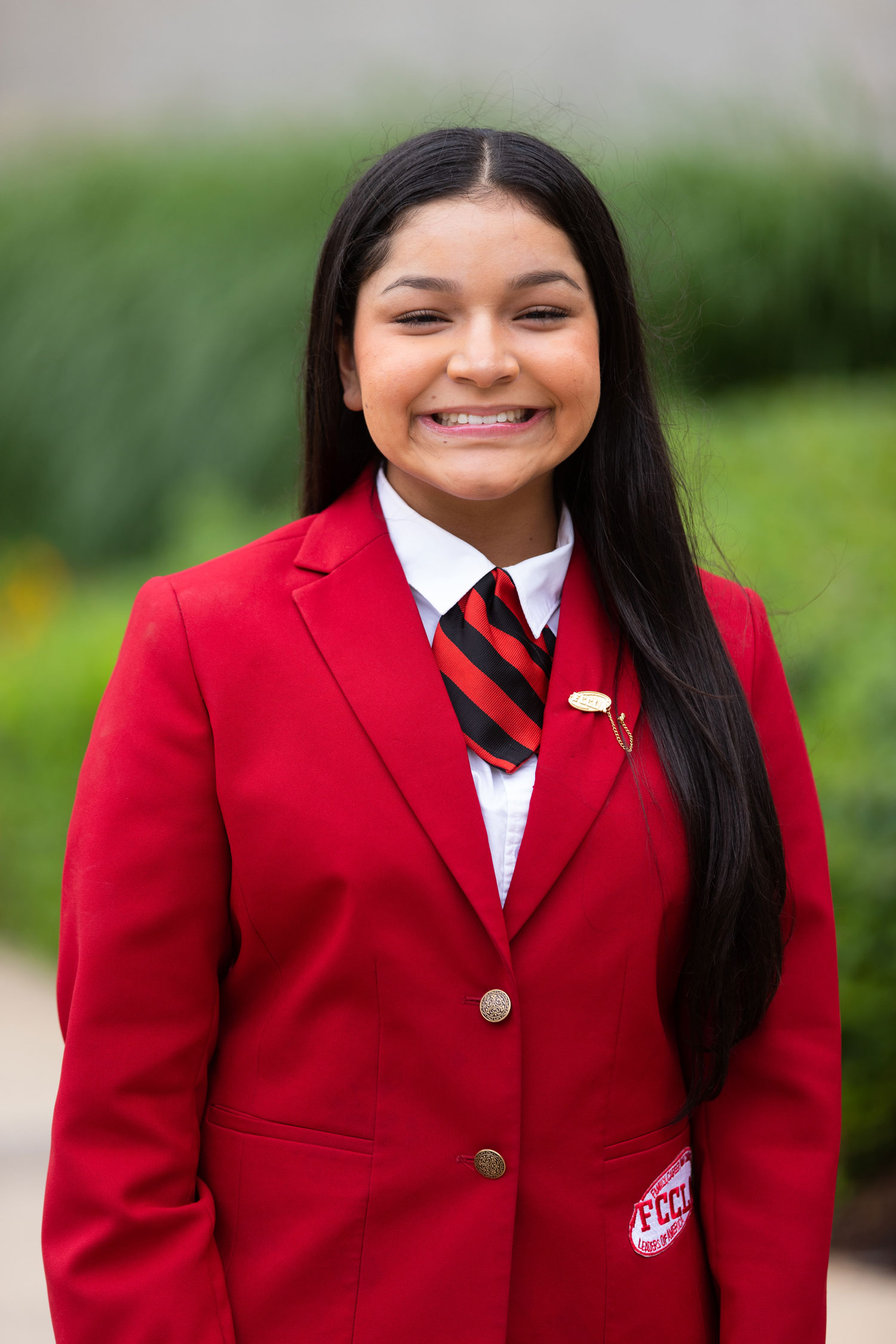 Briana Castro has been an active member of FCCLA for five years. She has held several chapter and state office positions including Washington State Vice President of Programs, State Vice President of Recognition, and has served two terms as the State Vice President of Region 8. Aside from FCCLA, she is a Link Crew Leader, Senior Class Officer, National Forensic League Competitor, and an active member in Natural Helpers and other community service-based organizations. She also enjoys trying out different sports and has been a member of her school’s wrestling and varsity swim team. After high school, Briana aspires to pursue a career in the medical field. She plans to spend a couple of years traveling the world to places that are underfunded and in high need of medical services. 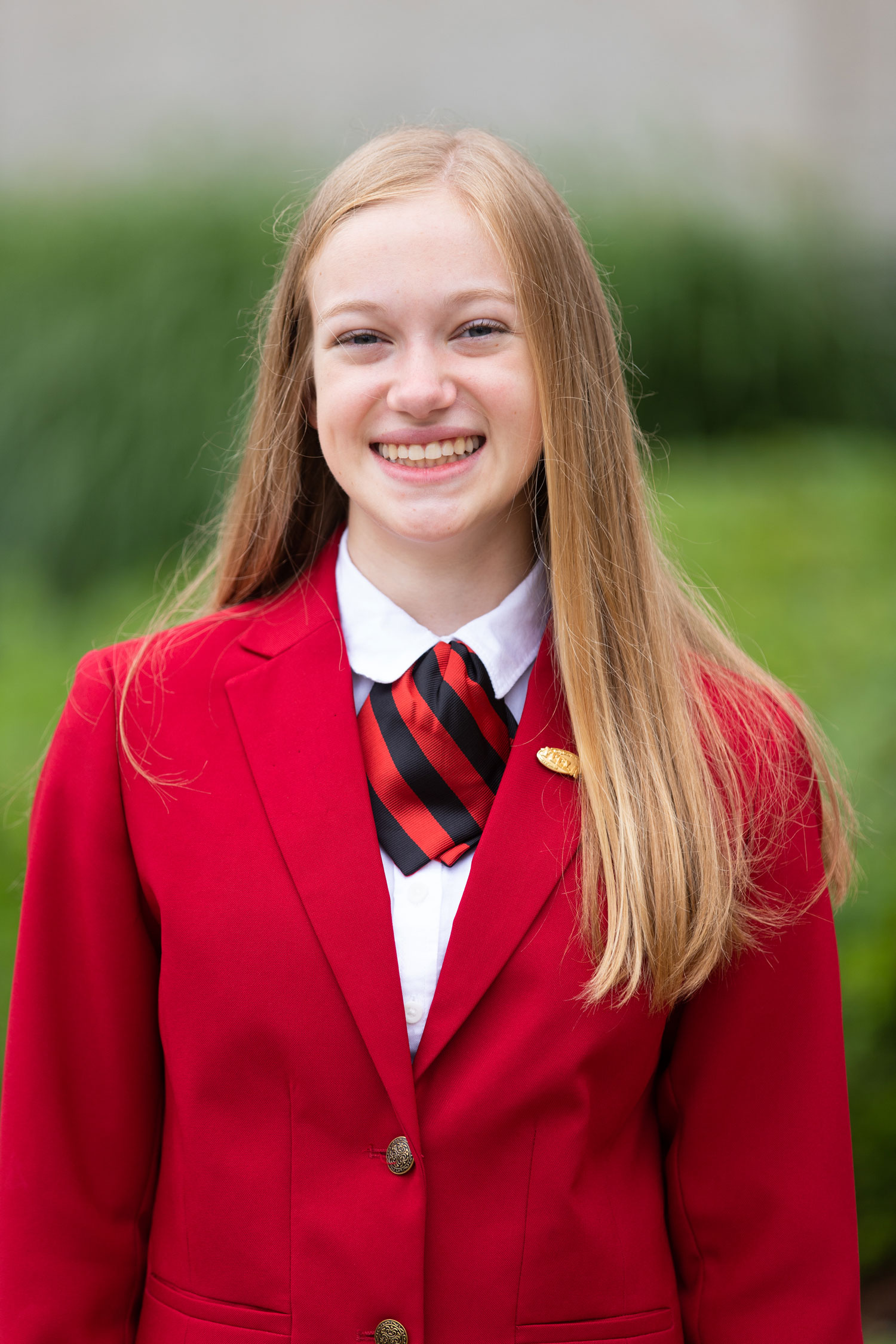 Katie Harfmann has been an active and involved FCCLA member since eighth grade. She has previously served as the Minnesota Vice President of Public Relations and was a member of Minnesota’s Peer Educator Team. In addition to FCCLA, Katie is actively involved in Student Council, National Honor Society, varsity track, and varsity gymnastics. Outside of school, she is involved in Honors Choirs of Southeastern Minnesota and a local gymnastics club. She enjoys spending time with friends and family, reading, painting, and exploring nature. After high school, Katie would like to pursue a career in medicine or business. 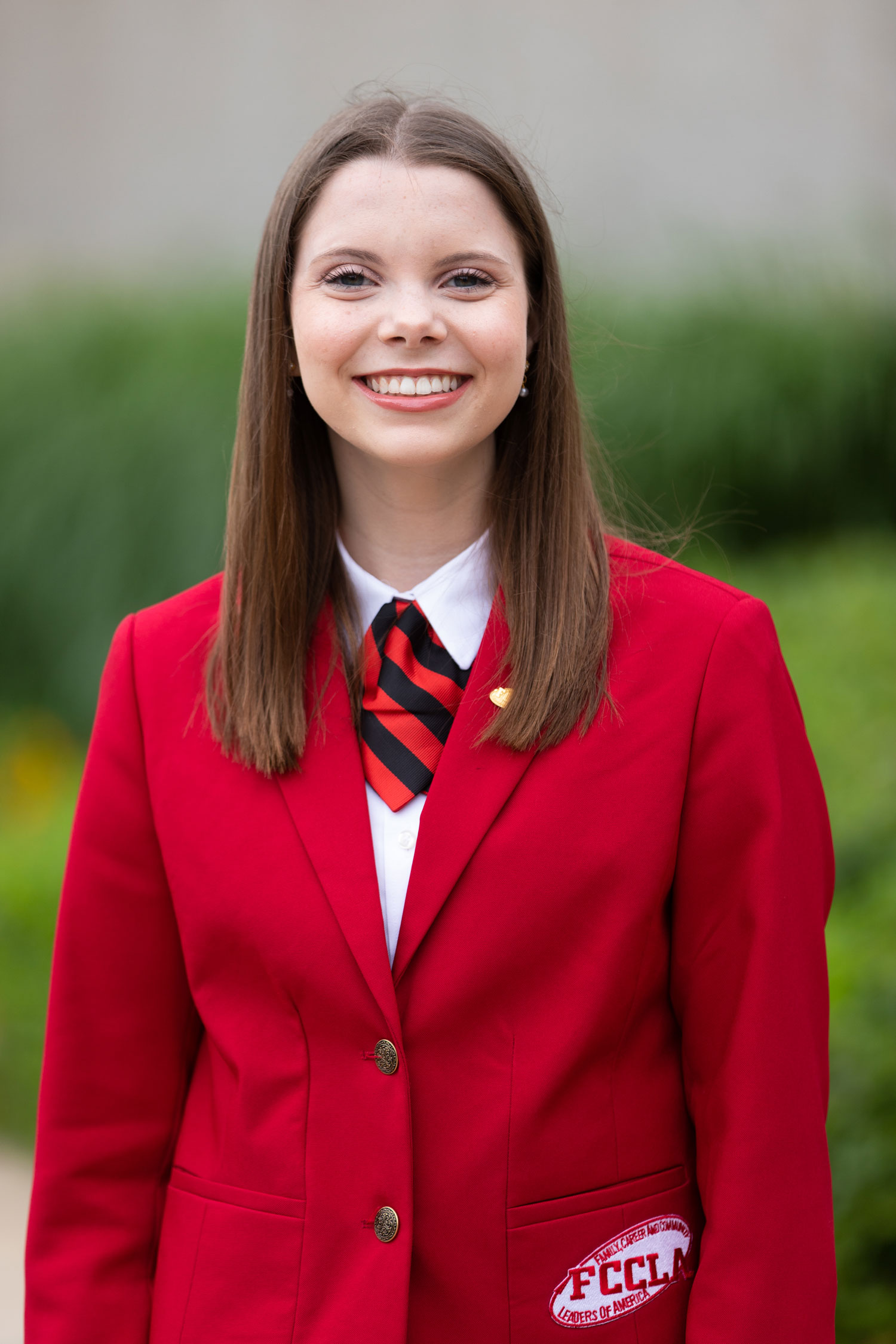 For the past six years, Haley Reid has been an active member of FCCLA. In 2021, she was elected as the Ohio Vice President of Chapter Engagement and she previously served as a member of the Ohio Region 1 Executive Council (REC). During her two terms serving on the REC, Haley created and implemented several social media campaigns for Ohio FCCLA’s platforms, worked alongside the Ohio State Executive Council in planning various association-wide events, and remained committed to advocating for FCCLA and Family and Consumer Sciences education. In addition to her involvement in FCCLA, Haley participates in National Honor Society, Youth in Philanthropy Encouraging Excellence, LINK Crew, Interact Club, Student Council, and Girl Scouts. After graduation, Haley hopes to pursue a degree in Communications and Political Science. 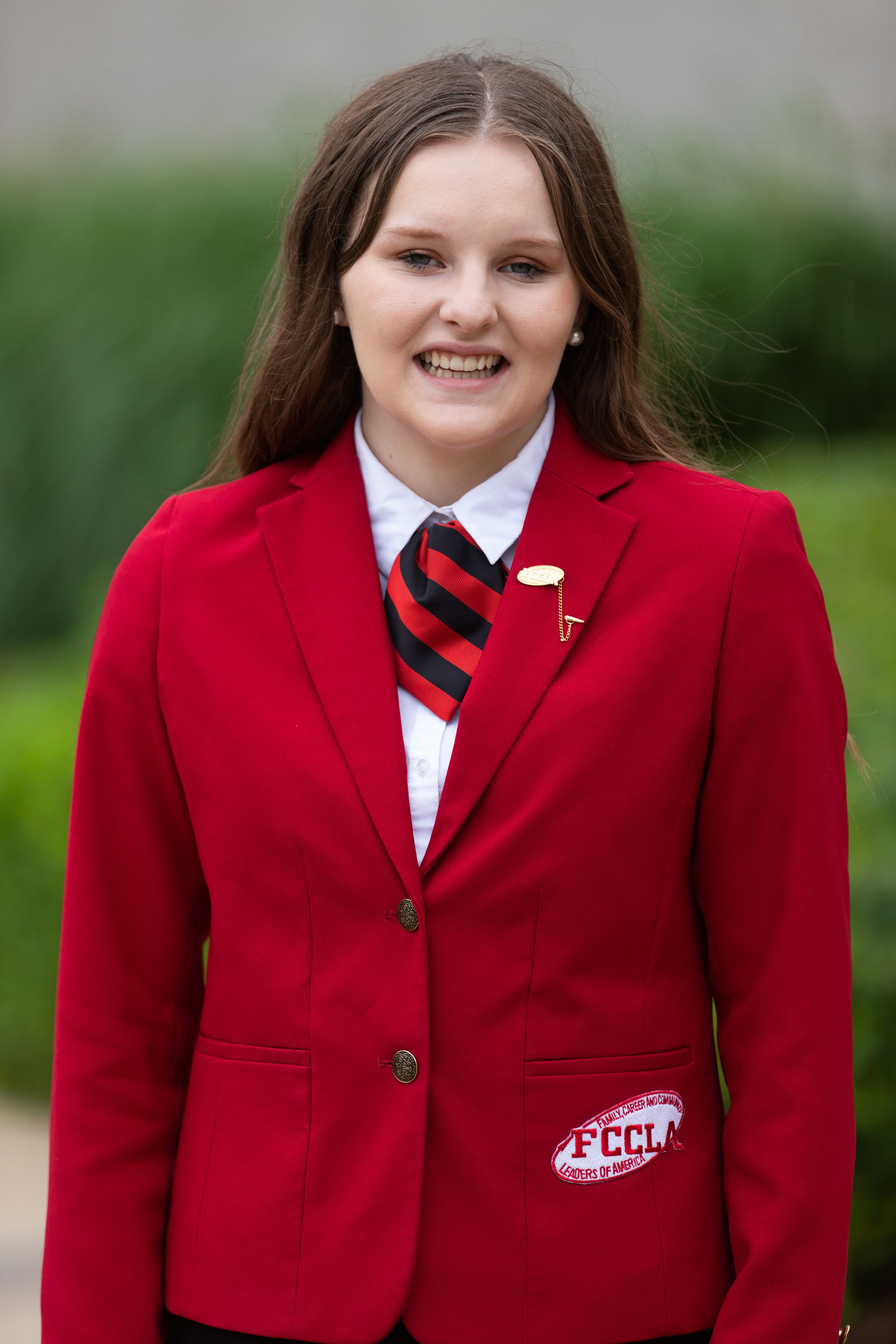 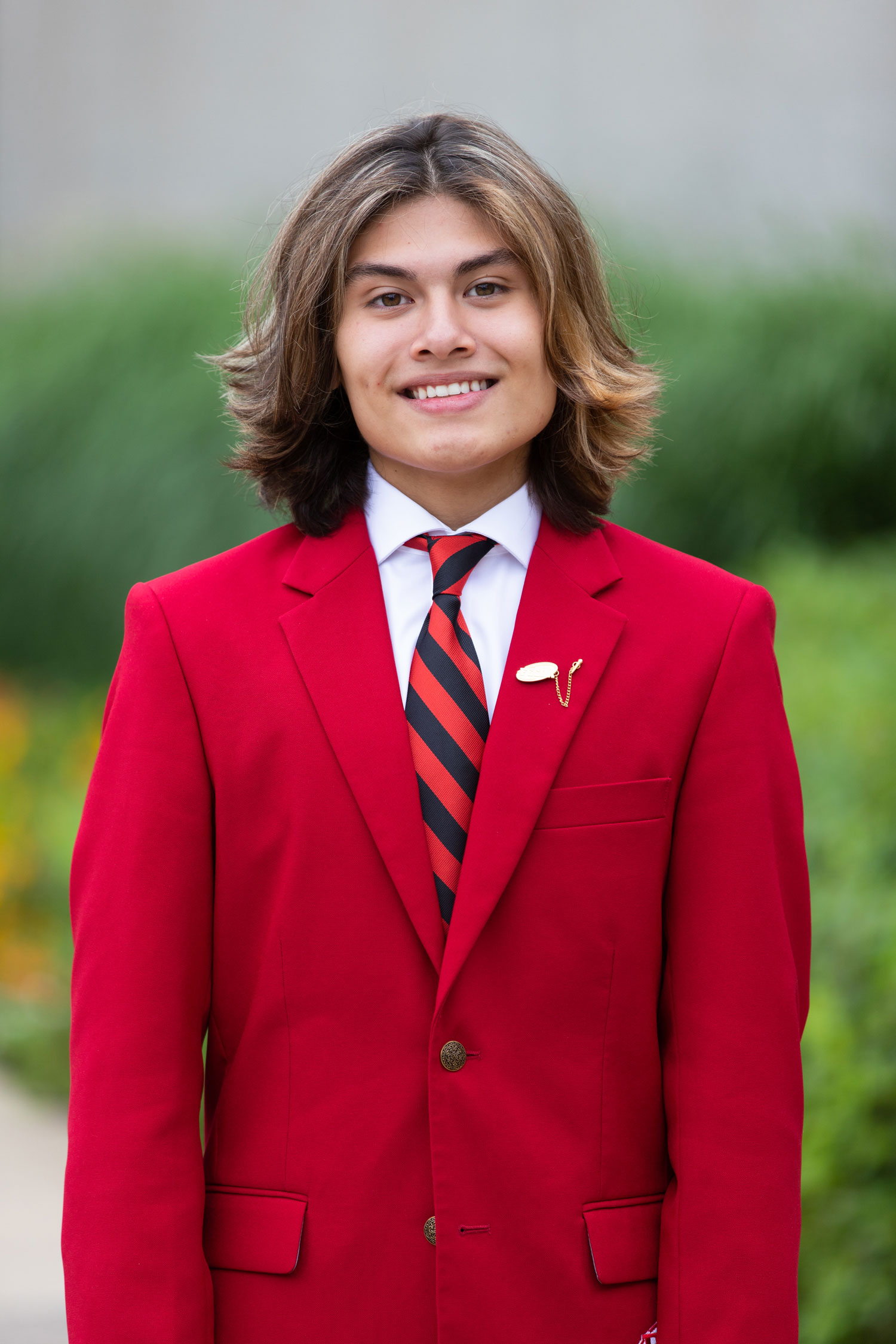 FCCLA has been an instrumental part of Cristian Osorio’s life for the past four years. Before being elected to the National Executive Council, he has held the positions of Arkansas First Vice President, Chapter President, and Vice President of Community Service. In addition to his involvement in FCCLA, Cristian enjoys being engaged in his school and community. He is a member of his school's Quiz Bowl Team, Spanish and Philosophy Clubs, as well as the Hispanic Community Center and Bookshop. After graduating high school, Cristian intends to study Political Science in college. 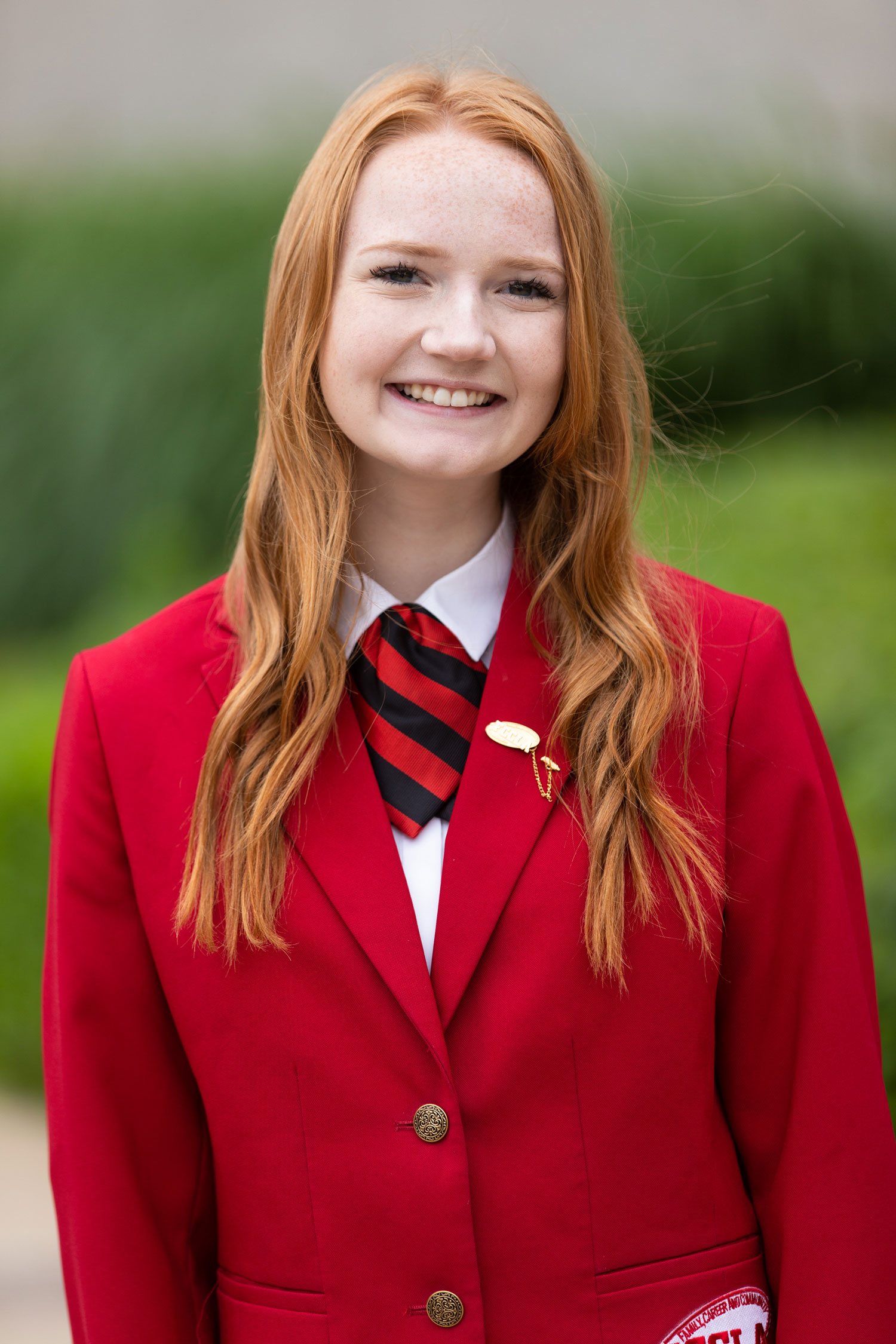 Madalyn (Maddie) Fox has been a part of FCCLA for the past four years. Prior to being elected to the National Executive Council, she has served as Iowa First Vice President, District Secretary, and Chapter President. Outside of FCCLA, Maddie is captain of her school's cheerleading team and is involved in track, show choir, Yearbook, and National Honor Society. In her free time, she enjoys playing with her dogs, cheering on the Cubs, and spending time with her family and friends. After graduating high school, Maddie would like to become a news anchor or go into real estate.