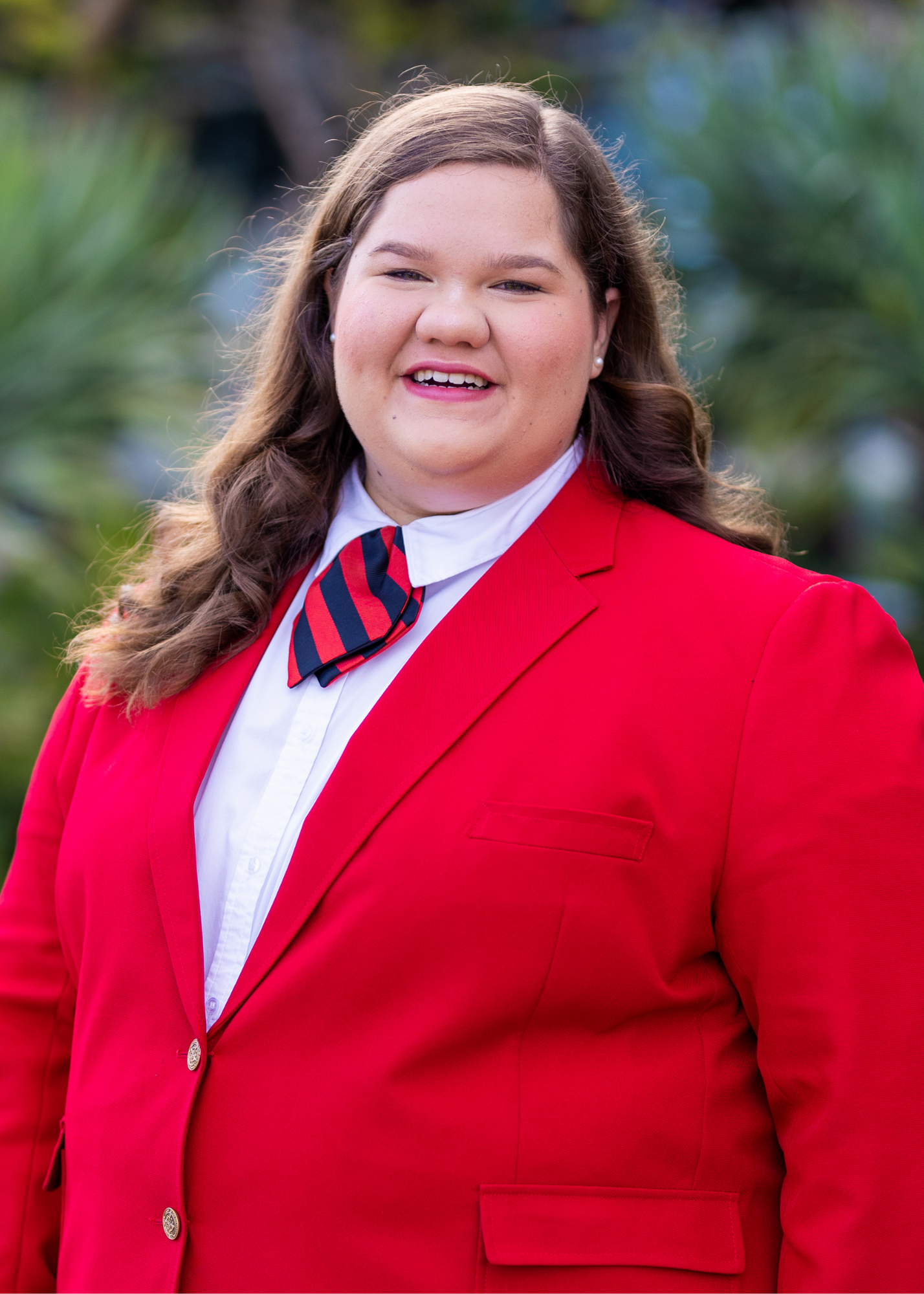 Mary Katherine (Mary Kate) Gunn is proud to have been actively involved in FCCLA for the past five years. While being a member, she has served as the Alabama FCCLA State President, Chapter President, and Chapter Vice President of Community Service. In addition to being in FCCLA, she serves as captain of her school's Scholars Bowl Team, a South Baldwin Chamber of Commerce Junior Ambassador, and Head of Sports Photography and Film Staff for her high school athletics program. She is also heavily involved in the Jennifer Claire Moore Foundation's Peer Helpers, the National Honor Society, Junior Optimist Club, and the BaxStrong Foundation. In addition, Mary Kate enjoys photography, pastry arts, cheering on the Braves, reading, playing guitar, and being on the water with her family. After graduation, Mary Kate plans to pursue a degree in business administration with a concentration in sports marketing and public relations. 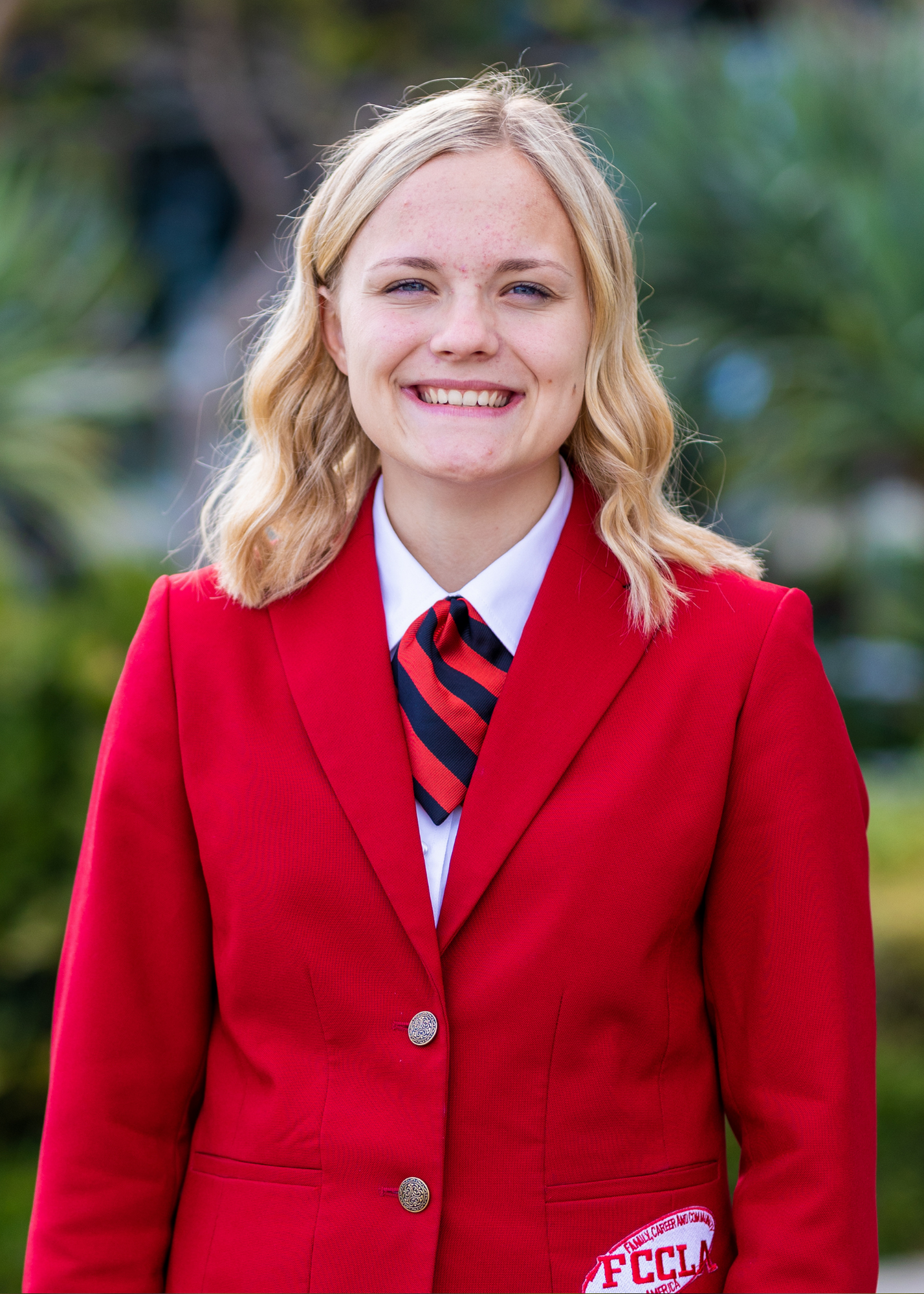 Shelby Smith has been a member of FCCLA for the past four years. She has served as the Wyoming FCCLA State President, Chapter Vice President, and Chapter Public Relations Officer during this time. In addition to FCCLA, Shelby stays active in her school community by playing varsity volleyball and participating in the National Honor Society, Student Council, and All-State Choir. Outside school, she spends time with her family and friends, plays guitar at her church, and works a part-time receptionist job. After graduating high school, Shelby plans to pursue a degree in political science or public relations 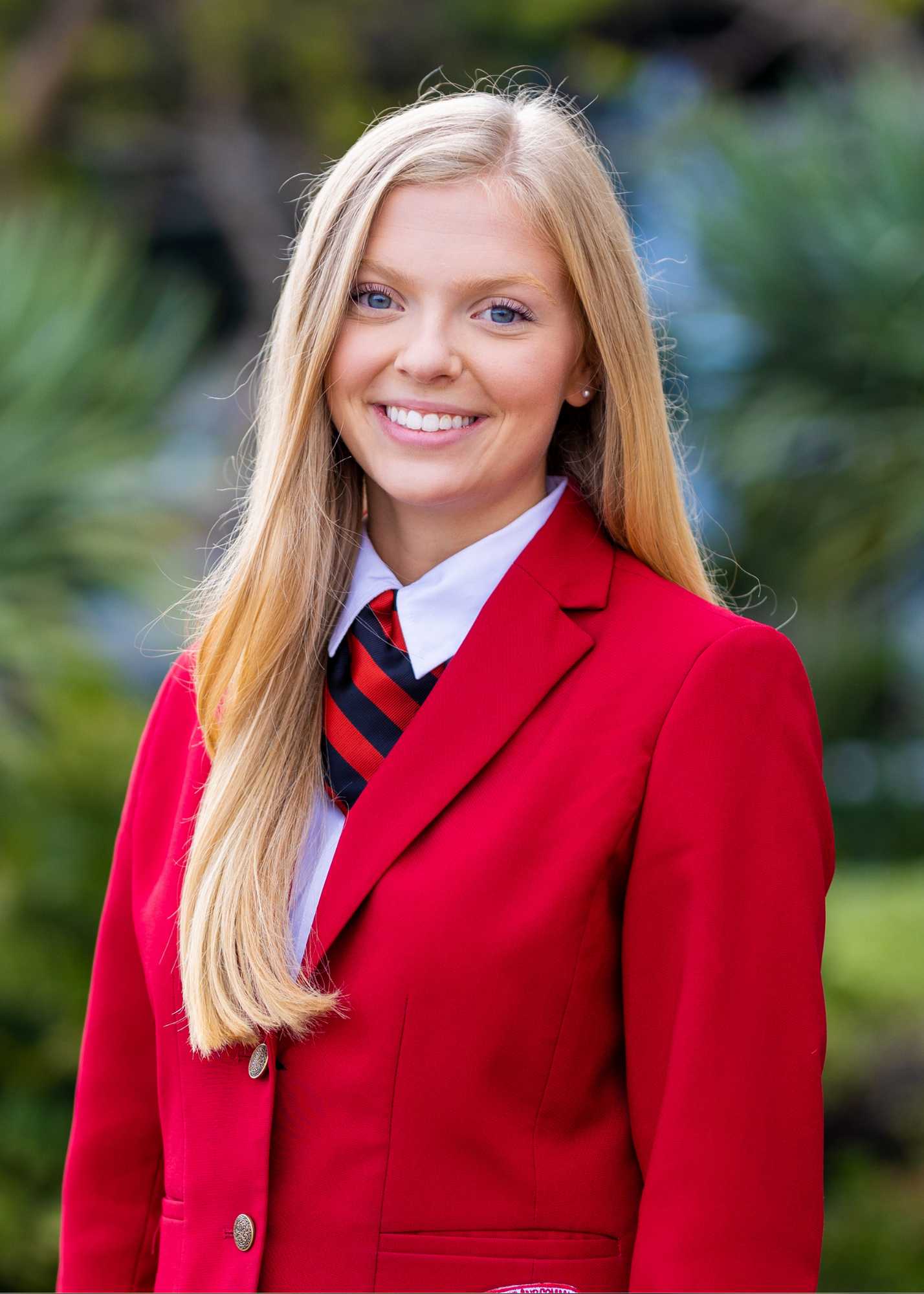 Reese Owens has been a member of FCCLA since seventh grade and has served as the Arkansas FCCLA First Vice President, District IV Parliamentarian, and various local offices. Reese is a very active community member with over 120 service hours recorded. In addition to FCCLA, Reese is an active member of the National Honor Society, BETA Club, Student Council, Student Ambassadors, Science Club, Mu Alpha Theta, and church youth group. She enjoys playing soccer, spending time with family and friends, and exploring the outdoors in the Natural State. After high school, Reese hopes to pursue a meteorology or child psychiatry degree. 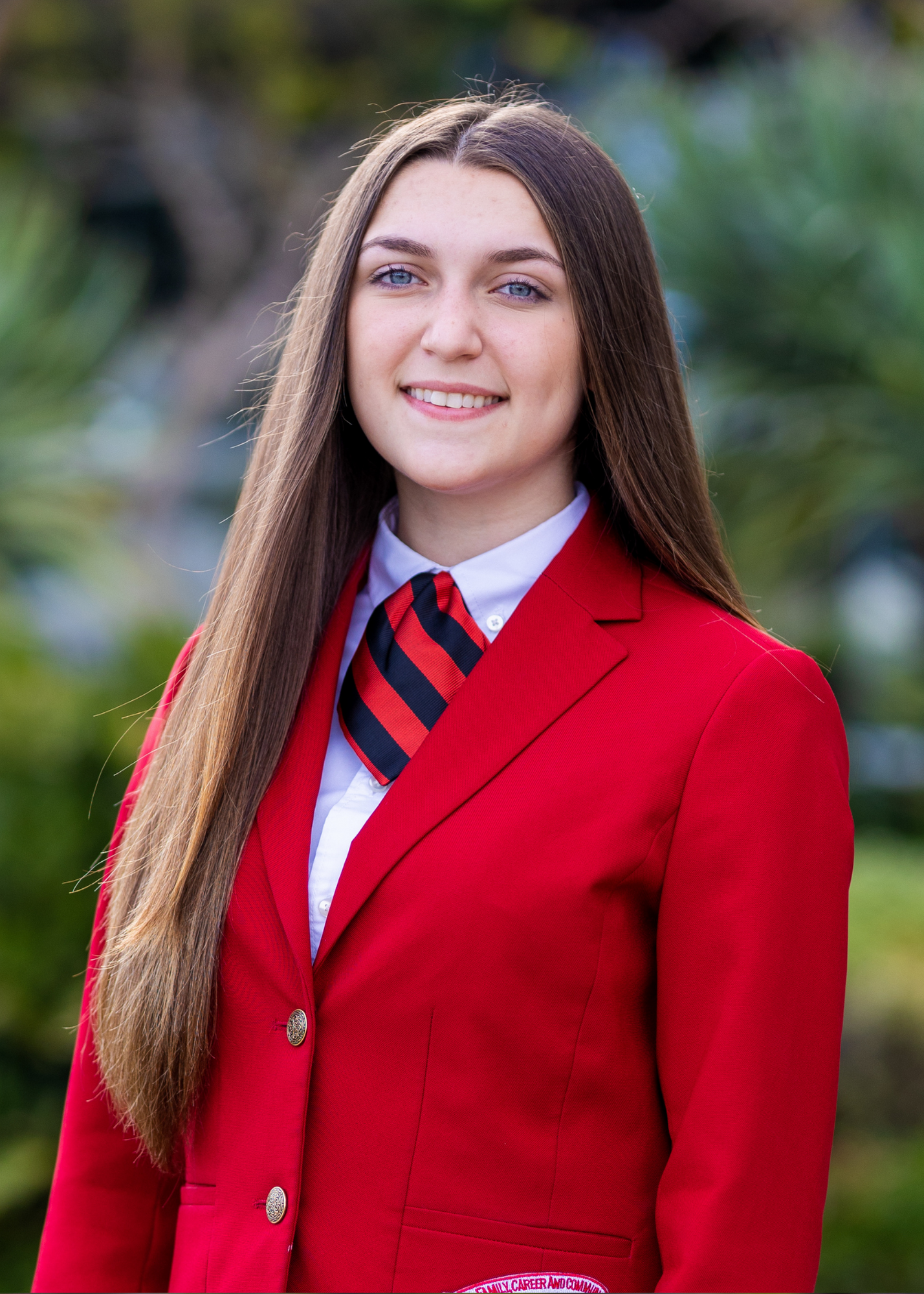 Gianna DeBruyn has been an active member of FCCLA for the past six years. Throughout her time, Gianna has served as the New Jersey FCCLA State President, First Vice President, Vice President of Leadership Development, and Vice President of Membership. She has participated in over 20 state and national conferences as a member and officer of FCCLA. In addition, she has participated in over 30 community service initiatives on the chapter, state, and national levels. Outside of FCCLA, Gianna is an active member in her community, an officer of the Art Honors Society, and regularly volunteers at her local food bank. During her free time, you can find Gianna spending time with her friends and family, reading on the beach, or working with ceramics. After graduation, Gianna hopes to pursue a degree in fashion merchandising. 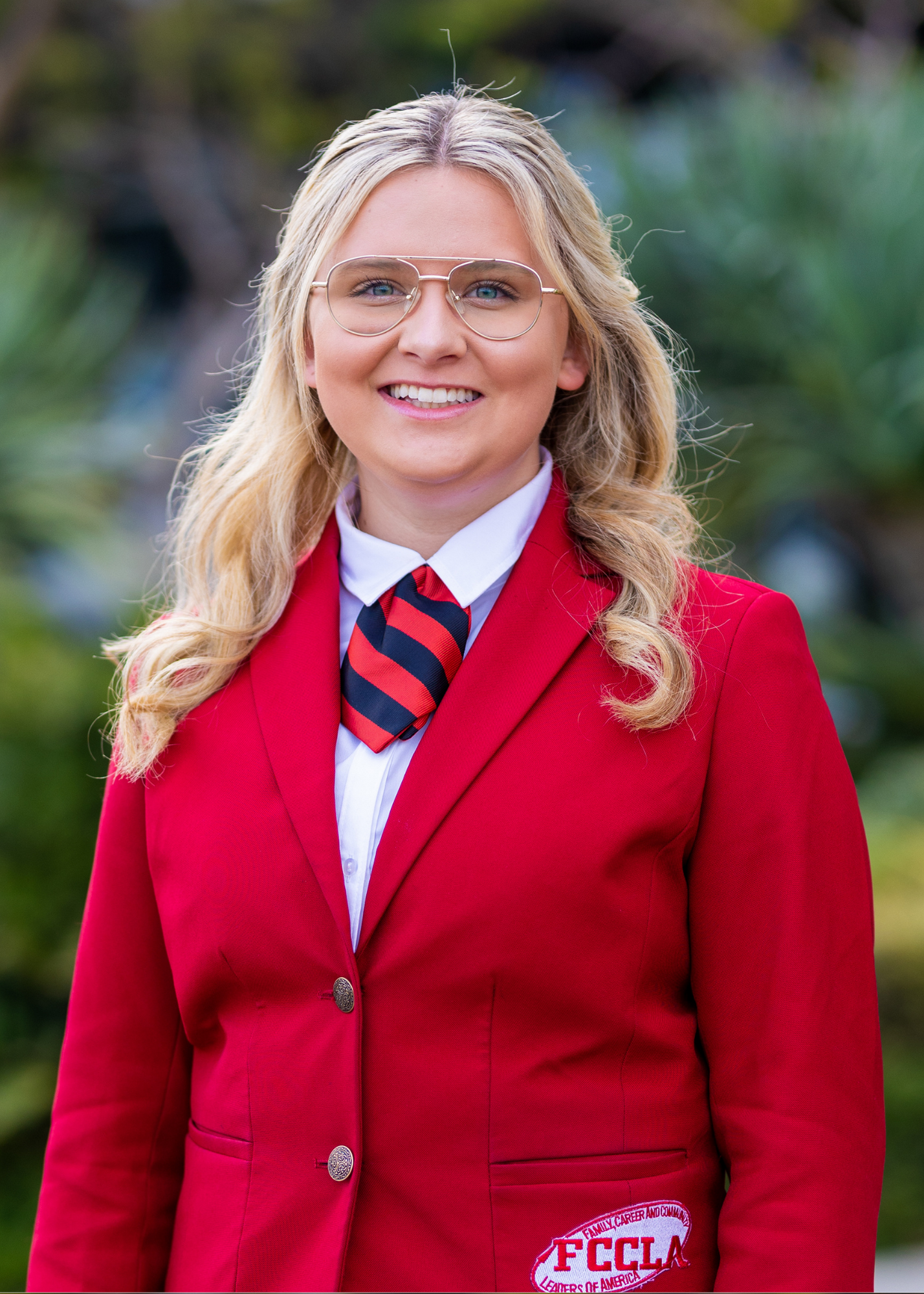 Amie Ann White has been an active member of FCCLA for five years. Before serving on the National Executive Council, she served as the Texas FCCLA Parliamentarian, the Region II Vice President of Service Learning, and four years of chapter officer positions. She is also a varsity and competitive cheerleader, Vice President of the National Honor Society, Student Body Treasurer, member of the Spanish Club, and involved in various CTSOs. In addition, she enjoys volunteering, painting, longboarding, and baking in her free time. In the future, she hopes to become a corporate lawyer while also pursuing a Family and Consumer Sciences education degree. 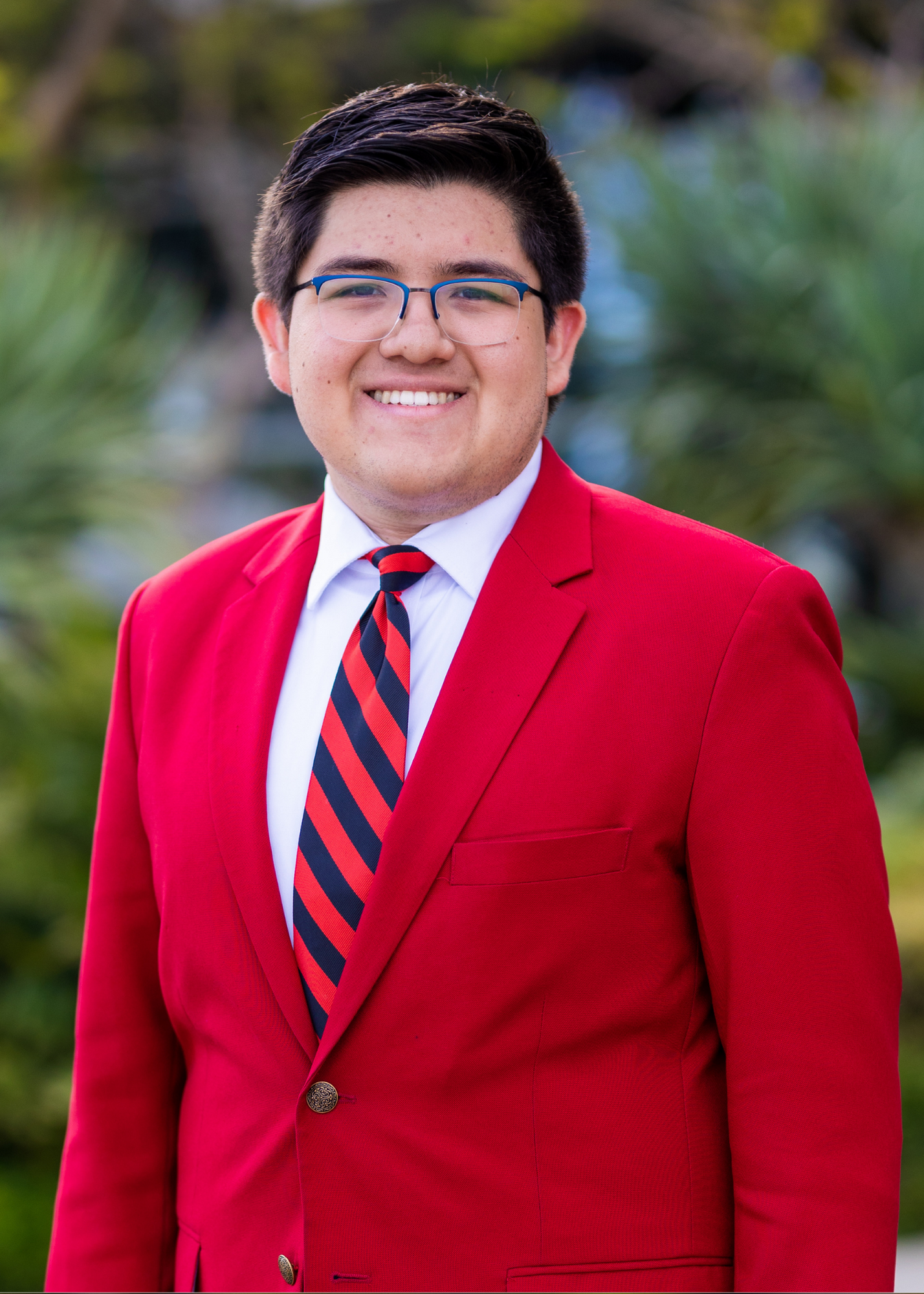 Jorge Sanchez has served FCCLA as a passionate and inspiring leader for over six years. Before being elected to the National Executive Council, he served as the 2021-2022 Florida FCCLA State President. Jorge's time in FCCLA has allowed him to participate in various Competitive Events, National Programs, and outreach opportunities with national partners. Outside of FCCLA, Jorge serves as a student ambassador for Junior Achievement and is a member of various school-based leadership and outreach organizations. He hopes his passion and service lead him to a career dedicated to making the world better. 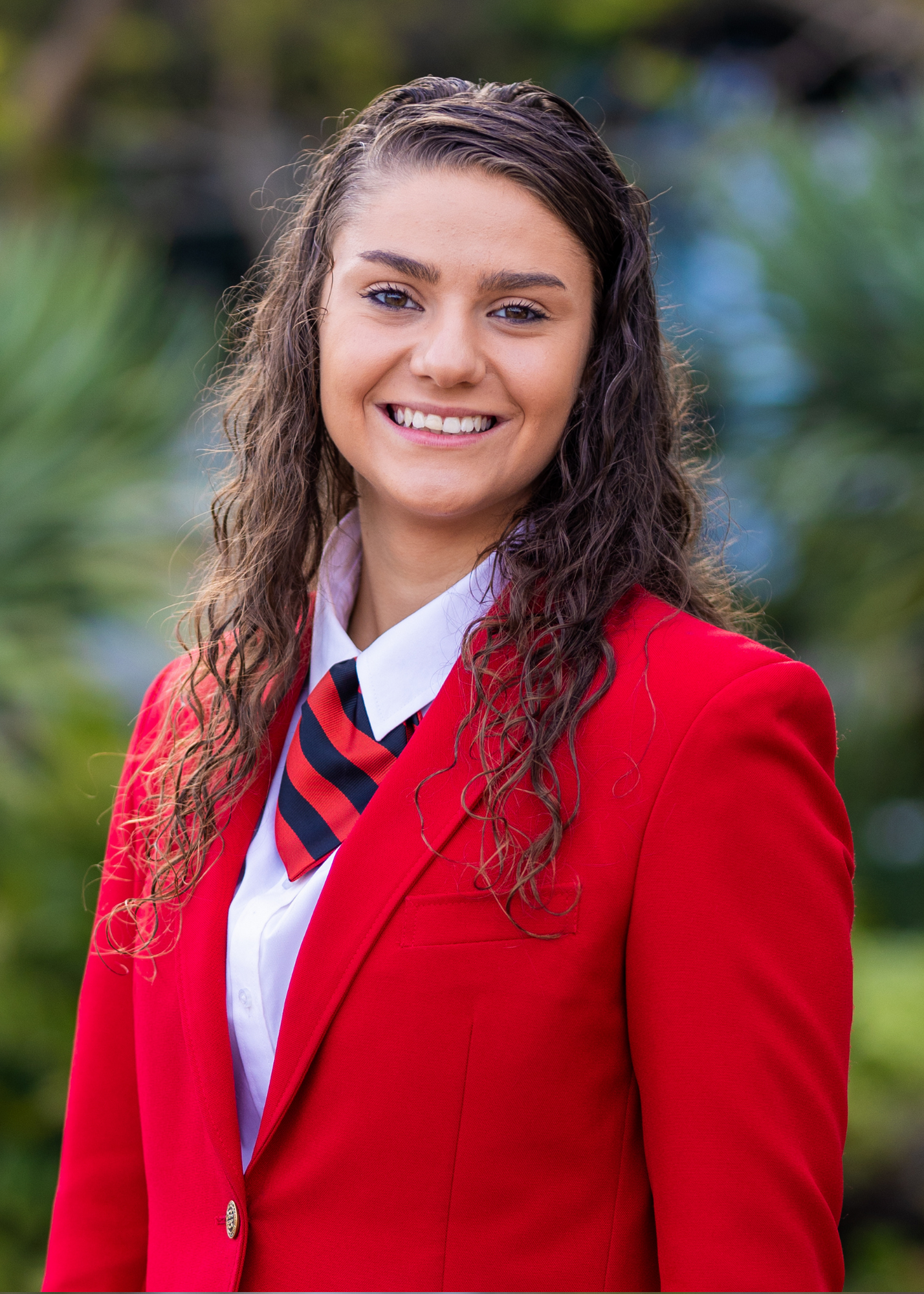 Throughout the past four years, Kate Coulter has been an active member of FCCLA. During those four years, she has served in multiple Kansas FCCLA offices at the chapter, district, and state levels. Recently, Kate served as the Kansas FCCLA Vice President of Peer Education and Vice President Membership. She has also served as a Kansas FCCLA District President and Chapter President. In addition, Kate is also involved in SADD, SAFE, Student Council, Powerlifting Club, WILD Science Club, National Honor Society, youth group, Fellowship of Christian Athletes, and the Foreign Language Club. She also participates in her school's volleyball, basketball, cheer, and softball teams. Outside of all these activities, she enjoys spending time with friends, reading, and enjoying time with her family. After high school, Kate plans to pursue a degree in communications to become a public speaker. 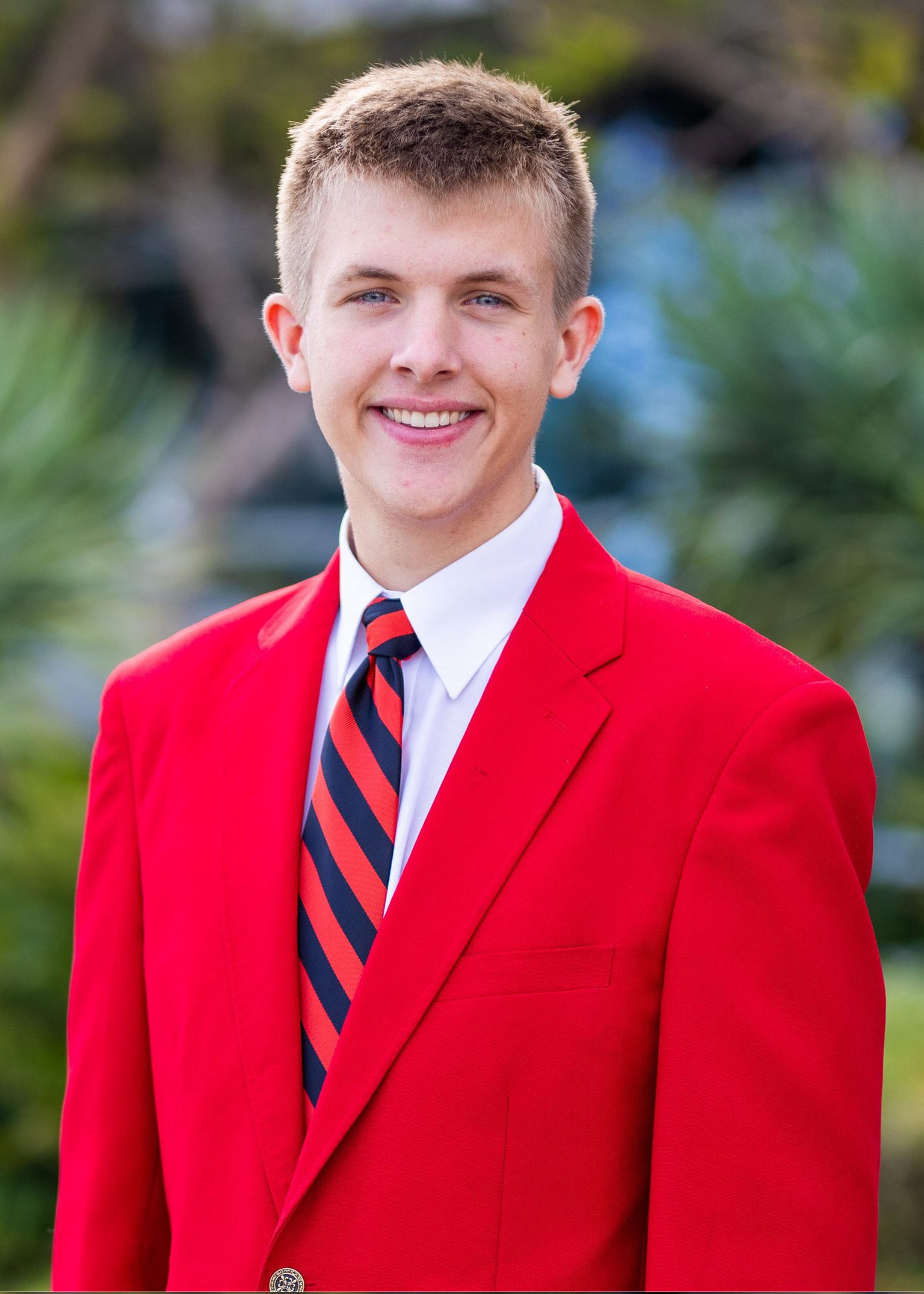 FCCLA has been instrumental in Nathaniel Janssen's life since the sixth grade. He has served as Area President for Southwest Minnesota and for two years as a State FCCLA Officer - Representative to the Board of Directors and Vice President of Marketing. Outside of FCCLA, Nathaniel participates in soccer and tennis, Knowledge Bowl, Robotics, and the National Honor Society. He also plays the trombone in concert and jazz bands. In his spare time, Nathaniel enjoys spending time with friends, playing video games, working out at the gym, and volunteering his time to run sound, audio, and lights at church. Nathaniel's career aspiration is to become a lawyer. 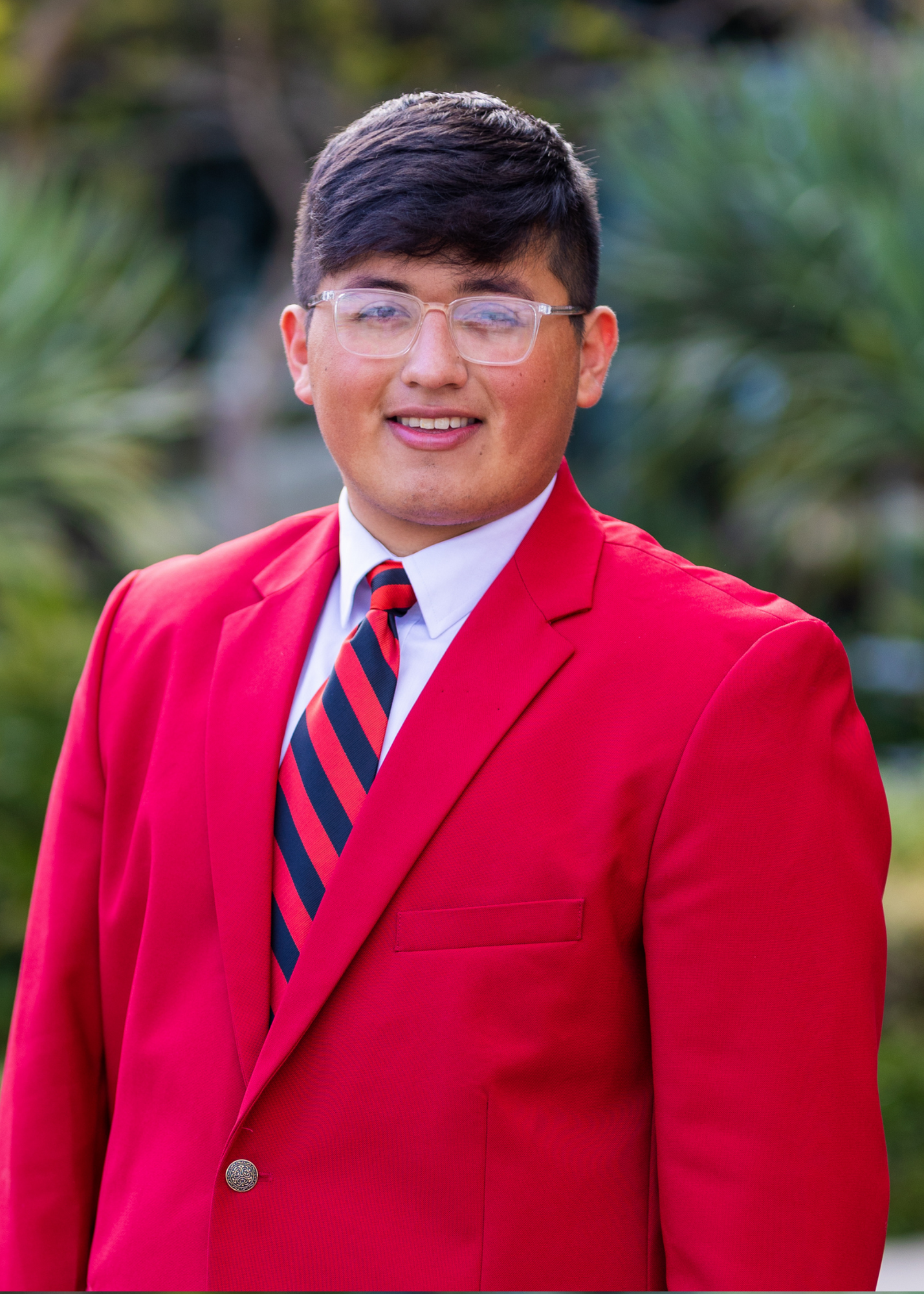 Rene Cabrera has been an active and involved FCCLA member since eighth grade. Before joining the National Executive Council, Rene served as the Kansas FCCLA State President. In addition, Rene participates in Speech and Debate, National Honor Society, Student Council, Viking CREW, & the Equity Action Network in school. Rene has an immense passion for serving his school and community. He currently serves as the Treasurer for the Topeka Youth Commission and Youth Development Leader at his local Boys and Girls Club. After high school, Rene plans on pursuing a career in public administration or education. 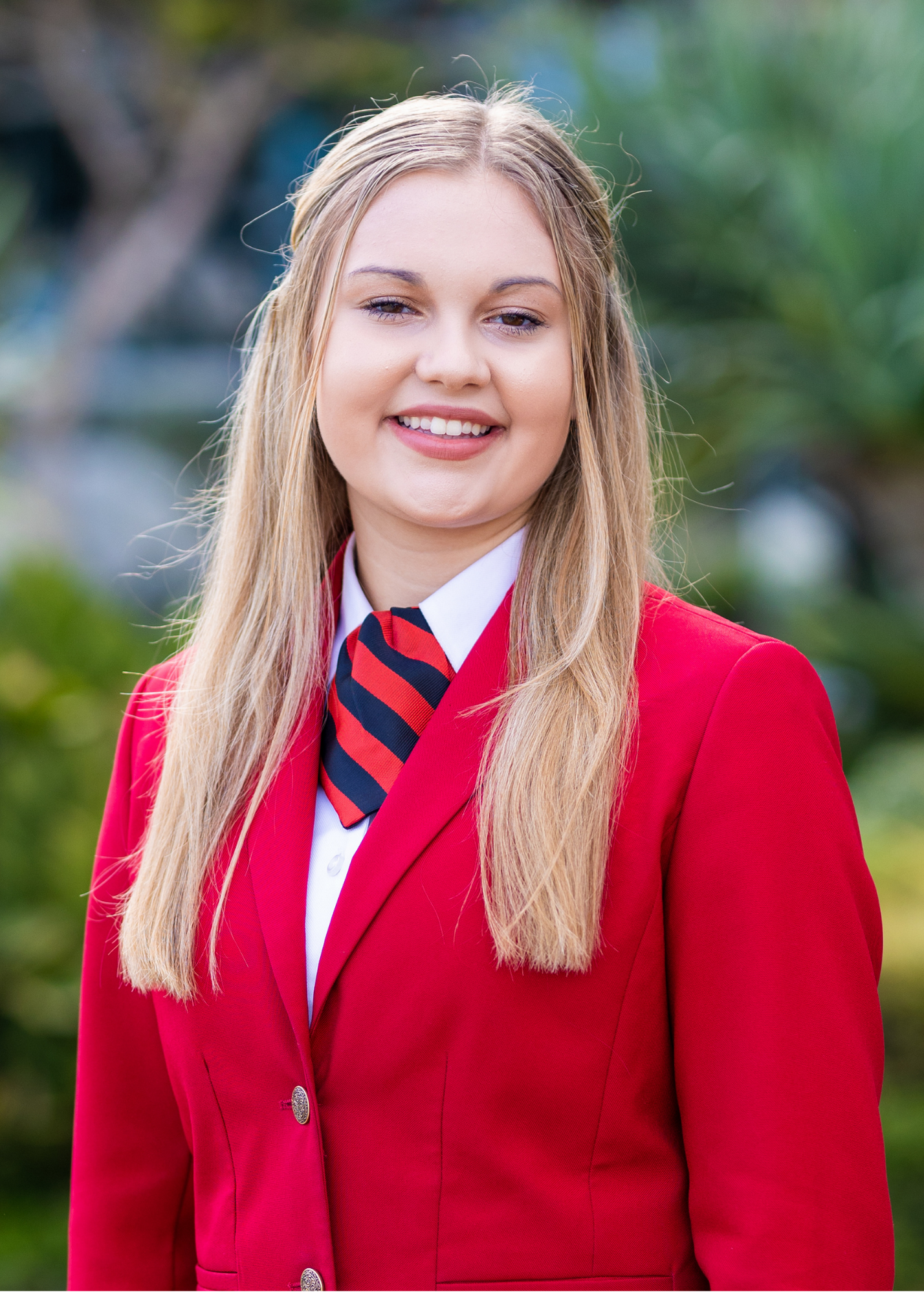 FCCLA has been essential to Madison Brian's life since her first year of high school. Throughout her time as a member, Madison has served as Chapter President, Region's Vice President of Parliamentary Law, and the Texas FCCLA Leadership Development Officer. Outside of FCCLA, Madison participates in the National Honor Society, other CTSOs, her church youth group, and yearbook. She also enjoys spending time with friends and family, scuba diving, fishing, and volleyball. After high school, Madison plans on majoring in either business to one day become a CEO or Family and Consumer Sciences education with the aspiration to become a part of the National Staff at FCCLA.